Tigers through to Grand Final 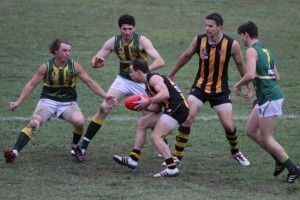 The Tigers stepped up to the big stage yesterday to get over the top of the Maroochy Roos in the second semi final at Mott Street. The Tigers hadn’t been able to taste success against the Roos this season making the win all the sweeter.

The much anticipated clash commenced at frenetic pace with both sides eager to get off to a good start. The first quarter was a classic finals opener with hard contests and skills under enormous pressure. It was fitting that there was only one point separating the teams at the first break setting up what looked like another low scoring and tight affair typical of the preceding encounters.

However, the Tigers were able to break loose in the second quarter to record five goals and hold their opponent goalless. This was a critical quarter with the weather closing in and threatening to change the game. Josh Caldow kicked two of the goals and provided the physical defensive pressure the Tigers needed to keep the footy in the forward half while Luke Faulkner was having another wrestling match with his Maroochy opponent. Faulkner was able to hit the scoreboard as well and keep the footy in the Tigers hands to make a creative impact on the game.

The promised rain finally arrived at half time to change the game but the Tigers persisted with their high possession tactics which served to create opportunities for the Roos. The Tigers kept pressing forward but could only record one goal from eight scoring shots keeping the game alive for a tense finish.

The Tigers midfield was bolstered by the return of Ben Heffernan Roper and Sam Paterson making the coaches role just that bit easier for the first time this season as he marshalled the troops and with his Captain in Caleb Brown they were able to control the centre. Brown and Daly were both physical and clinical in their efforts.

Corben Sellen was once again a critical force for the Tigers with his running and defensive pressure creating turnovers for the Tigers to exploit while the run and carry of Spencer Greville was on show again.

Whilst it may be unfair to single any others out of the strong Tiger defence, Dane Lucas was another attacking backman who gave the Tigers the rebound needed to win finals football.

The last quarter was impacted by a deluge of rain but the skills on show from both teams was a credit to all the players. Both sides were able to record two goals as the ball went from end to end but the Tigers were able to hold on to a handy lead and be the first team to go into the 2015 Grand Final.

The Final will be held on the 12th September at the Moreton Bay Sports Complex..