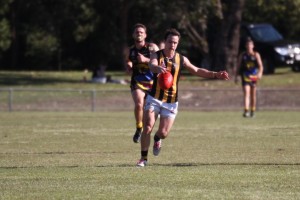 The Tigers were forced to work hard to overcome a determined Caloundra in their last fixture for the 2015 season at North Street Caloundra yesterday. The Tigers needed a good hit out leading into the finals series with a bye next week providing a soft finish to the season.

The game was played in ideal early spring conditions on a quality deck as the Tigers burst out of the blocks with first use of the ball and a towering mark from Fraser Thompson up front. Thompson slotted the goal to record the first major of the game within seconds of the start.

The Panthers weren’t phased however as they proceeded to steady the ship and play out an enthralling first quarter. The Tigers pushed out to a three goal lead by the end of the first quarter to feel comfortable with their early lead.

Sam Nevins work in the ruck continued to be a feature of the game as he gave the Tigers the drive needed while Clinton Brunnenmeyer relished the possession and was creative every time he got his hands on the footy.

By half time the Tigers had moved to a five goal lead and seemed like they would power away from the locals.

However the home team was still fancying their chances of an upset as they emerged from the main break with plenty of fight to challenge the visitors. The Tigers were held to one goal for the third quarter while the Panthers kicked two and looked set for one last push in the final term.

However, the Tigers came out from the three quarter time huddle full of fight and determination. They needed to finish off strongly with the finals looming and with Spencer Greville leading the way with two goals in the last term, they finished off any hope of a Caloundra fightback. The Panthers were unable to record a goal while the Tigers surged ahead with five of their own.

The last round bye for the competition sees Mayne, Noosa and Nambour sitting out the weekend. For the second year in a row the Tigers will be minor premiers.

The Tigers will wait to see who their opponents will be for the second semi final at home on the 29th August with Maroochydore and Noosa on twelve wins each but Maroochydore have a game to play against the much improved Moreton Bay Lions.