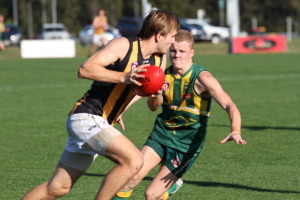 In two seasons the Tigers have only been eclipsed on two occasions, both times by a determined Maroochy side in low scoring dour battles, this time in front of a large local crowd at Fisherman’s Road.

The margin between the two sides was no more than a handful of points for three and half quarters but the Roos were more composed at the end controlling their matchups and maintaining their plan to outlast the Tigers to take vital match points as the competition enters its last rounds in what is becoming an enthralling dog fight at the top of the table.

For yet another week the Tigers were slow to get going allowing their opposition to set the tone for most of the first quarter. And, yet again the Tigers were able to claw back a lead to go into the first break with a small credit. The pace of the game was a step up from the previous week and the intensity shown by both sides highlighted the importance of the occasion.

The Tigers backline was under pressure from the start but with the ball in the hands of pacy Spencer Greville they looked sharp with his run and carry keeping them in the game. The Maroochy midfield lead by the big engine of Michael Roberts and seventies style Jackson Ryan created some headaches for the Tigers but the old heads of Shaun Daly and Caleb Brown were doing their best to even things up making for plenty of interesting battles during the course of the match.

Both sides backlines can be credited with the scoreline being so close all day as they restricted their opponents opportunities so no surprise that each side’s defenders dominated in their top six identified by their respective coaching groups. Tom O’Malley lead the Tigers defence in another unblemished effort critically supported by Corben Sellen and Bill Stephens while Ben Davies and Dean Hartley held solid under the finals like atmosphere.

There were only two points in the game at the last break and the Tigers were feeling confident that they would be able to get over the Roos but as the last term drew to a close their opponents skilfully shut the game down after kicking ahead to a small but match winning lead.

Maroochy go into their next round against Sunshine Coast rivals Noosa with plenty of form in another exciting top four clash while the Tigers take on Aspley in their local derby at the Den.