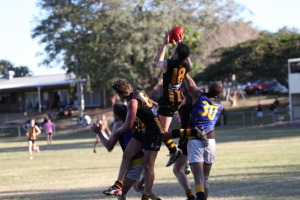 Mayne were stunned in the first quarter of their game against Caloundra yesterday at the Den as the Panthers started in blistering fashion kicking the first two goals to set the game alight.

The Tigers were forced to regroup quickly and slow the momentum of the rampant Panthers before taking some control to go into the first break with a two goal advantage.

It was the experience of Ben Heffernan Roper and Shaun Daly that brought things under control and with the ship steadied the Tigers set about accumulating possessions and building a score.

The Panthers were well in the game in the second term as they continued to battle hard but were unable to capitalise on the their good work as the Tiger defence held strong.

By half time the Tigers had stretched their lead to five goals but there was much to be done. As usual, fearless Sam Paterson was putting his wiry body on the line in the midfield to show the way as he put in a best on field performance for the local team.

In the absence of a few of the more experienced hands, the Tigers were well served again by the young brigade of Zac McLean and Jasper Craven who both add zip and dash to the group.

After the main break the Tigers broke the game with a six goal quarter to finish any hope of a fightback from the Panthers. Dean Hartley had a chance to go forward and made the most of the opportunity with a much celebrated goal while also putting on an aerial show which entertained the Tiger supporters. In four years at the club, he has been a mainstay of the Tiger defence but he relished the chance to show his attacking capabilities.

The Mayne hierarchy were very pleased to see Spencer Greville hit top speed yesterday as he ran and carried the footy out of defence to give the Tigers some handy pace and finish.

The last quarter showed the determination of Caloundra as they defended to the end to hold the Tigers to one goal in a tough struggle. The battle between the defences of both sides provided a worthy finish to the game. Corben Sellen was again solid in his new role in defence as the coaching staff look for utility in the team.

The Tigers are on the road again next week as they look to atone for their loss to the Maroochy Roos the last time they met. It promises to be an exciting match.