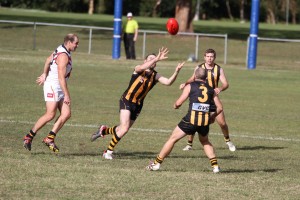 The Mayne Tigers were able to break away from their Noosa rivals in the dying stages of the game at Mott Street yesterday in an enthralling battle of the backlines.

Both sides were missing a few of their big stars but it didn’t detract from a tense match where the footy was in hot dispute for the entire game. The defensive work of both teams featured with Mayne’s Tom O’Malley and Bill Stephens almost impenetrable as they grimly smothered, spoiled and repelled their opponents good work. At the other end Bushie Copeland was equally dour in defence which set the scene for the day.

However, both sides were challenged in front of goal with neither capitalising on set shot opportunities in what was ideal conditions. The Mayne Tigers were able to straighten things up late in the game to kick away to a five goal win but will be sure to be setting up in front of the goals during the week. Josh Caldow was a key target for the home side as he brought down what are now being seen as his trademark hangers but will rue not being able to convert his work into more majors.

In the midfield, it was close work and at times brutal as both teams challenged each other physically as they went in for the ball with no thought for life or limb. The class of Ben Heffernan Roper gave the Mayne side some clear air as he set up opportunities for his forwards. Young Jasper Craven showed a clean set of heals to drive the Tigers forward and also finish with two goals. Craven’s diminutive stature doesn’t restrict him to outside work as his defensive efforts and tackling played a critical part in the game.

Corben Sellen played another courageous game for the Mayne side as he chased, tackled and created turnovers to once again pressure opponents into errors and play a lead role in the win.

The Tigers will play the Caloundra Panthers next week at the Den in another exciting home clash.