Tigers too strong for plucky Blues 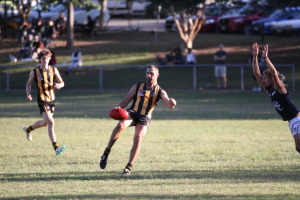 Mayne hosted the Nambour Blues at Mott Street yesterday on a glorious winter day just made for footy. Unfortunately for the Blues, the Tigers were able to field a strong side who were all keen to ensure they held on to their respective spots while the Blues were once again troubled by injury missing some of their key prime movers.

The Blues however showed exactly just what footy clubs are all about with some tremendous club spirit shown by a number of the boys who played two games for the day and the way in which they backed up was a great credit to them.

The Tigers awarded the best player in the opposition on the day to Lanze Magin who played most of the reserves and a starring role in the ones.

Whilst the Tigers were comprehensive winners on the day, the Nambour team played a good open brand of footy, never gave in right to the end but just couldn’t take advantage of all their good work on the scoreboard.

The Tiger coaching department were however very pleased with the way the boys kept to the task all day making sure it was a four quarter effort.

The veteran goal kicking duo of Luke Faulkner and Andrew Housego were relentless in their quest for double figures as the forward fifty delivery gave them continuous opportunities. Housego only missed on one occasion in eleven shots in a remarkable display while Faulkner was almost as efficient kicking a further four behinds. Faulkner also spent time in the middle to cap off an all round performance.

In what is becoming a repetitive report, Ben Heffernan Roper showed a clean set of heals and some silky skills to dominate his position around the rucks while Caleb Brown was also superb in the middle in a consistent display.

Former Wolves team mates Jasper Craven and Zac McLean both enjoyed a day out as they showed class beyond their tender years.

The Tigers travel to Burpengary next Sunday to take on the improving Moreton Bay Lions.