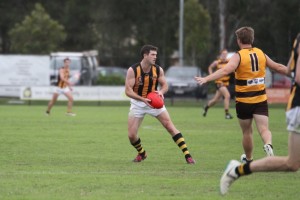 Tigers Coach Shaun Daly dominated the midfield at Graham Road yesterday against the Aspley Hornets to set up a comprehensive win. Daly accumulated disposals at will as he set up a continuous flow of forward entries for the hungry Tiger forwards.

Captain Caleb Brown would have been best on field on any other day as he ran rampant to also keep the stats recorders fully occupied. Both Daly and Brown had spells up forward but still kept the scoreboard ticking over at a steady pace.

Credit must go to Sam Nevins who gave the Tigers first use of the footy in the middle and around the ground with his strong bodywork and experienced tapwork.

The 2015 recruits continue to put their stamp on the game as Ben Heffernan Roper showed off his pace and accurate skills to play a very influential role in the Tigers victory.

Swing man Josh Caldow was influential whether in defence or up forward but it was his aerial display and bruising attack on the contest that had the Tiger supporters out of their seats.

Whilst it is easy to wax on about the dominance of the Tiger midfield, the defence of the Tigers plays a critical part in the result each week. Young Tiger stalwart Billy Stephens fresh from a starring role for South Queensland last week showed why he is held in such high regard in Tigerland with another reliable and effective performance as part of the tight back six.

The Tigers return to the Den next week to take on Nambour and Hinterland.