Mayne bounces back on the road 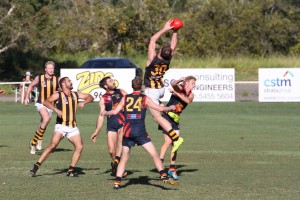 The Mayne Tigers bounced back emphatically yesterday from their malaise last week in the clash with Noosa to retain top position on the ladder.

In sweltering conditions for late May the Noosa Tigers got off to a blistering start to kick five goals and take a thirteen point advantage into the opening break . However, the Mayne Tigers had come with a steely determination to prove a point and set themselves for a strong response.

Whilst injuries have hit the Tiger squad hard over recent weeks, it was very clear that the depth of tall timber in the Mayne Tigers was still a big factor. Mayne rotated a constant stream of tall leading targets into the forward half making matchups extremely difficult for the Noosa defence. The result was five unanswered goals for the quarter and the away side going into half time with a solid lead. Andrew Housego kicked his 400th goal for the Tigers in the second quarter to go to number three on the all time Tiger goal kicking list behind Dale Woodhall and Barry Spring.

Coach Daly reinforced to the group the necessity to respect their opposition and expect a strong response after the main break.

However, the Mayne backline held firm with Bill Stephens and Dane Lucas combining to make things very difficult for the Noosa forwards to get any clear air. Right across the back six it was evident that everyone was determined to hold the line. On the back of that defence, Ben Davies was creating constant opportunities for attack.

The forward defensive pressure was also a factor in the third quarter as the Mayne Tigers kicked further ahead and set up for a strong finish.

The Mayne Tigers finished off the game with another five goal quarter sharing the majors around with Sam Nevins kicking two when spelling from the ruck while Daly, Caldow and Housego chimed in as well. The four big men all recorded three goals for the game to make for a good spread of prime scorers.

The midfield work of Daly and Brown under constant pressure was a feature of the game while quiet achiever Jake Magill accumulated possessions at will providing the link in many forward movements.

The Coach emphasised after the game the important part that the whole team played in this critical clash on the road.

The competition has a week off for the representative weekend giving the Tigers a chance to get some players back into the squad and set themselves for the middle of the season.