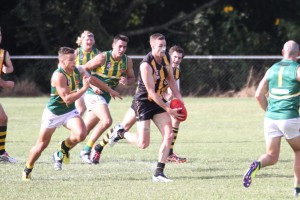 The Maroochy Roos ended one of the Tigers longest ever winning streaks with a planned raid which took the home side by surprise and the icing off the Reunion Day cake.

The Tigers hadn’t lost a game in thirty one previous outings including pre-season games so the expectation for the Tigers continued to grow while the prize for the club to stop the run was significant.

The Tigers started off hesitantly kicking into the wind and could only register one major from six attempts through to the first break and this inaccuracy continued for most of the day while the Roos made the most of their opportunities to go in with the lead.

The second quarter was much more settled for the Tigers but they were unable to shake their opposition with the experienced defence lead by Dzufer a feature. The Tiger defence held the Roos goal less for the term while the return of three goals at the other end gave cause for optimism with a lead of sixteen points at the main break.

However, the reverse occurred in the period after half time with the Roos kicking truly for a four goal return while the Tigers couldn’t break the shackles remaining goal less and setting up an exciting finish for both team’s supporters.

The Tigers threw everything at the Roos to create numerous opportunities to steal the match but once again inaccuracy in front of goal meant they would pay the price as the Roos capitalised on their opportunities kicking truly to record a well deserved win.

It was a very close and enthralling match with the Roos being more bold at times and cleaner with their groundwork skills while the Tigers had an off day in many respects.

The Tigers were well served by Caleb Brown who worked hard all day in the midfield earning him the much coveted Mick Nolan Medal for Best and Fairest in the Mayne team. The Medal is awarded in the game which occurs closest to the anniversary of Mick’s passing in May 2008. This is the second occasion that Caleb has won this Medal.

The Tigers go on the road next week to play Noosa in what shapes up as another exciting game for both sides as things get more interesting at the top of the table.