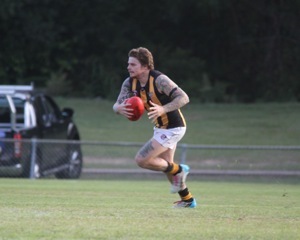 The Tigers overcame a determined Caloundra on Saturday in hot and windy conditions at North Street.

Whilst the Tigers were never in any trouble it was evident that the growing injury list is taking some toll with several key players out for a few weeks.

This is not to say that the Panthers didn’t give it everything and but for their inaccuracy in front of goal the result might have been much closer. It was a very competitive effort from which they could take some confidence away for the games to follow.

The absence of key players is providing opportunities for the Tigers to experiment with young talent as well as extend the versatility of the entire group.

Fraser Thompson is really starting to hit his straps and is making the most of his opportunities in front of goal with strong consistent performances. He finished with four goals but was instrumental in a number of others.

Andrew Housego kicked another four goals to keep his season tally ticking along and at the same time was able to manage his workload appropriately over the course of the game.

Ben Heffernan Roper proves his worth each week as he continues to blend his talent into the Tiger line up. He was instrumental in setting up the team’s forward raids in a best on ground performance while Josh Duffy was also effective around the midfield in his usual team oriented manner.

As usual, Corben Sellen ran himself into the ground, chased and tackled as well as finished with a very handy three goals.

The Tiger backline was its usual workmanlike team within a team as Bill Stephens stood out in a strong defensive performance.

The Tigers will play Maroochy this week in a much anticipated clash with both clubs looking to consolidate at the top of the table.

It is also the annual Mick Nolan Medal Day where the Mayne Tigers Best and Fairest will be honoured with a medal struck in the name of the former club legend.