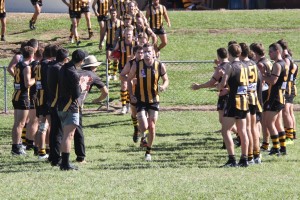 The Mayne Tigers approached the Anzac Day game against the Aspley Hornets with two things in mind, to honour the fallen of the past and their long serving Captain Caleb Brown running out for his 150th appearance for the club.

In another blast of late summer, both teams had to get over the excessive conditions to gain an advantage, however, so focussed were the Tigers, nothing was going to stop them yesterday. In a blistering ten goal first quarter the game was over by the first break. The Tigers were clinical in carrying out their game plan as they delivered the ball to Faulkner and Housego who could seemingly do no wrong.

It was disappointing for the Hornets and for the supporters on both sides that they were depleted of some of their stars who were required for duty on this important day however they never once stopped trying and full credit goes to them for their effort.

In a true Captain’s display Caleb Brown played a number of roles throughout the day to lead his team to a big victory in this milestone game for the Tigers, one he will be pleased to remember.

Coach Shaun Daly was once again a critical element in getting the midfield working to rule. However, it was the tall timber of Luke Bradford for the Aspley Hornets that gave the Tigers some concern in the middle forcing the Tigers to come up with different strategies on the run to gain the ascendency.

The midfield options available to the home team in Ben Heffernan Roper and Clinton Brunnenmeyer in concert with Daly made the day all the more difficult for the visitors.

As usual the back half was a key factor in the Tiger’s victory with many rebounding raids emanating from a fleet footed Spencer Greville while the other members of the back six were as usual very miserly.

Luke Faulkner was able to bag another twelve goals over the course of the game while Andrew Housego added another eight to his growing tally. Both were spoilt for delivery but could have added many more to their day had they kicked all of their opportunities. They entertained the crowd with their aerial work and show no signs of slowing up.

The day culminated with the Aspley Hornets sharing the day’s events over a drink. Luke Bradford received the Tiger’s award for the best opposition player.

The Tigers meet the improving Moreton Bay Lions next week at home in the Ladies Day block buster.