Brownie hits 150 for the Tigers 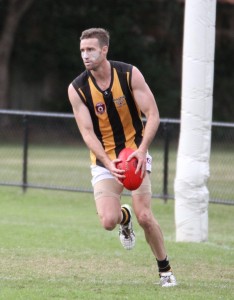 The Mayne Football club is looking forward to celebrating another milestone in the career of one its most cherished players. Caleb Brown will play his 150th game for the Tigers this Saturday in its Anzac Day clash against the Aspley Hornets at Mott Street.

Caleb joined the Tigers in 2002 in chance circumstances after being spotted by Mark Browning, AFLQ Development Manager, kicking a footy with mates at Marist Ashgrove where he was a boarder. As luck would have it Richard Champion was coaching the Western Taipans and playing at Mayne at the time. Caleb played the last few games of the season for the Tigers and his footy career was underway.

Brownie, as he is affectionately known has been one of the cornerstone players in the Tigers lineup anchoring the backline through one of the most challenging periods in the club’s history. Whilst this is the case, it has also been a time to forge wonderful friendships and it is clear by the testimonies of team mates below that there is much more to Caleb than just his tremendous football skills.

Brownie has also been a regular representative at State level, a position he also achieved when he successfully tried his hand at NEAFL level playing a season for Morningside with the blessing of the Tiger hierarchy. After satisfying his desire to prove himself at that level in 2011, he returned to the Tigers to take on the Captain’s role in 2012 and lead the club to Premiership victory in 2014, a very proud moment.

The Mayne Tigers congratulates Caleb on this significant milestone of 150 games and looks forward to seeing plenty more of him in years to come.

The following testimonials have been provided by his team mates and coaches, past and present, which all go to speak to the sort of person that is Caleb Brown, as a player and a person.

“Brownie is the most professional player to pull on a Mayne jumper. He is an extremely well- grounded person who oozes class, skill and respect. All of Brownie’s 149 games have been a demonstration of impeccable preparation, hard work and courage. There is no denying that Caleb’s leadership is unselfish and team focussed which is a true reflection of the Brown/O’Connor contingent that surround him. It has been a pleasure to play along-side Caleb and observe his unmeasurable contribution to the club. Caleb’s only remaining achievement is to taste the sweet nectar of a Carlton Draught. Well done on a fantastic effort!”

The constant throughout Caleb's career at Mayne has been his meticulous preparation.  The way that he has gone about giving himself every chance to succeed is impressive and a wonderful lesson for emerging players.  Most notably a few seasons ago we decided to move him from his favoured position in the backline to a new role as the "go to" key forward.  He spent the entire off season working on his goal kicking and leading patterns to develop into one of the most dangerous forwards in the competition.  What an outstanding achievement to play 150 senior games after taking up the game of AFL in grade 12 and to now rank amongst one of the most decorated players of all time for the Mayne AFC.

He has looked out for me on the field and off it since I was 17. In my first senior game I got hit late and straight away he was there and had my back even though he barely knew me(he actually got a yellow card). Since then we have been great mates, he and Jenny have cooked me dinner more times than I can count and given me a place to sleep after nights out just as many times. As a player his ability and achievements are enviable and I have learnt a lot from him, but as a clubman and teammate he has set the standard very high on and off the field for a long time and that's why he is so respected.

As a player, Browny is not only one of the best players I have played with, he is courageous and he does all the small team things which often go unnoticed like tackling and shepherds. He is one of the best trainers at the club and leads by example at every training session and how he prepares for a game.

Off the field, I have looked up to Browny ever since I can remember and he has been a big influence on my life. He is always willing to help you out and is always available for a chat and to pass on some advice. Browny can relate to anyone, whether it is the youngest bloke in the team, or the oldest.

He also has a mind for detail and could tell you who he played on in a game 5 years ago, his number and how many possessions he had on him. Loves a story, loves an excel spreadsheet and thinks he can dance after a couple of vodka lime sodas (although the sugar is a bit much these days).

Browny is one of the most unselfish and professional players I have ever played with and certainly coached. 100% of the time he puts the team first and that’s why he has captained for so long and so well. He is respected by his peers and myself in a manner that he and his family should be proud of. He should be recognised as one of the greatest people and players that have come through this great club. Browny and Jenny have helped Steph and I out from a personal point of view in a way that we can only hope to repay them.

"Brownie is a sensational talent as we all know. However I believe it is his work ethic and dedication shown in his training and preparation which makes him stand out even further. A true loyal servant of the club and a great mate who we all look forward to playing alongside each week."

I owe a lot to Caleb Brown. If it wasn’t for Browny and Mitch Ferguson’s persistence during the 2009/10 off season I wouldn’t be a Mayne Tiger.

He has been a terrific club person and role model for the Mayne Tigers over many years and it’s a great reward to finally crack the milestone of 150 games for the club.

When someone talks about the Mayne Footy Club the two players that come to mind straight away are Caleb Brown and Andrew Housego.

Browny is the epitome of the ‘modern athlete’, fit, tall, athletic, skilful, agile and great hands, (even though by his own admission he has girl sized hands).  There is no doubt in my mind that if Browny had the knowledge of the game and skill he possesses right now when he was 20, he would be playing AFL Football.  He is what AFL clubs look for.

What stands out to me is his consistency. If you look at his B&F results over the years, he is a perennial top 3 place getter, which shows his durability as a footballer.  He is meticulous with his preparation, diet, training and routines (somewhat OCD I have heard).  But this is what makes him stand out so much, his professionalism is elite for this level of football.

Best of luck on Saturday mate, we will be all making sure we get the win for you.  A fantastic year of milestones for you too with the little fella not too far away either.  Hopefully our boys can carry on the tradition as father Son Tigers one day.  I wish Caleb and Jen all the best with the birth also.

Brownie has been a terrific servant of this club, first pulling on the boots as a skinny kid from the country right back when we were still playing out of Kedron. He has seen many changes in personnel in his time and stuck with the club to eventually taste the success that he had longed for. He has matured into a great leader of the club. Always blessed with tremendous athletic ability, he has used this to cement himself as a champion of the Mayne Football Club.

How do you sum up Brownie as a footballer; skilful, quick, reliable, courageous, meticulous, just to name a few. You can’t question his ability as a footballer and a leader. His pre-game routine is as flawless as a Luke Faulkner photo shoot. He is the type of player that won’t leave any stone unturned in order to get the best out of himself and perform for his team. The ultimate team man! Congratulations on 150 games mate, we’ll all celebrate with a hard earned lemon, lime and vodka afterwards!

Caleb is one of the first team mates you pick when you go to battle. He is the player that prepares better than anyone else on either side going into a game. He is the player who plays to the game plan better than anyone else. He has a stubborn yet steely determination to win at all costs and always gives his absolute 100% best. He is blessed with the physical abilities most can only dream of. It’s a joy to watch him play when he is in full flight knowing that whenever the ball comes near him he will either mark it, crumb it, or tackle the opposition they get it, all while not breaking a sweat.

When you combine all of these fantastic traits you have one hell of a player and it has been a pleasure to play alongside him for almost all of his 150 games. I have no doubt that he will be one of the best in the team in his 150th.

Browny often plays a different game to the rest of the field. His attributes make him the ultimate utility, and since I've played with him, he has played significant parts forward, back and now this year in the midfield.

He often confirms with me that the backline is where he belongs, amongst the men's department, where the real work is done. However, I'm sure he doesn't mind a snag, nor racking up 40+ possessions. Truth is, he belongs closest to the action, and I will always enjoy running behind him on Saturdays.

Congrats on your 150 mate! and may the protein shakes, sugar bans and yoga carry you through another glorious 150.