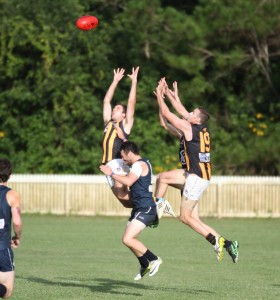 The Tigers came up against an improved Nambour and Hinterland Blues team at Palmwoods yesterday and were given a full workout for the day even though the final scores didn’t reflect it.

The Tigers were immediately aware that the Blues were going to take it up to them from the first contest with some heavy tackling and pressure around the contest.

Coach Daly came in for some special attention early as the opposition plan was clearly to restrict his ability to dominate midfield contests. However, as the game wore on, he was able to accumulate possessions and take control of the centre of the ground.

The old firm of Housego and Faulkner were in action again recording a good proportion of the days scores but Faulkner didn’t have it all his own way as he also came in for some concentrated pressure from a young and focussed opponent in Nathan Spring making for an entertaining contest.

The Tigers were able to get away to a five goal lead in the first term with the midfield of Brunnenmeyer and Heffernan Roper starting to make their respective presence felt. As the season wears on it will be interesting to see how these new recruits blend into the line up.

The second term saw some very entertaining clashes as the Blues continued to add pressure however they were unable to break the defensive lines of the Tigers with Dane Lucas and Corey Massingham working the ball out of their area with method and structure. Ben Davies celebrated his 50th appearance for the Tigers in style as he continues to play an important role in the efficient back six.

The Tigers midfield was able to make best use of a dominant performance from quiet achiever ruckman Luke Radonich as he got up and over his young opponent. It was a remarkable effort given he rucked for the entire game.

In the end the Tigers ran out the game over the next two quarters in efficient style with seven and six goals apiece to record a very solid win against an improving opposition.

Credit should go to the new coaching staff at Nambour and the hard work of the collective committee and supporters .

The hospitality at Nambour was first class which climaxed with Caleb Brown being awarded best player by the Nambour hierarchy at the after game presentation.

The Tigers will go on to meet Aspley in the Anzac day clash at home next Saturday.