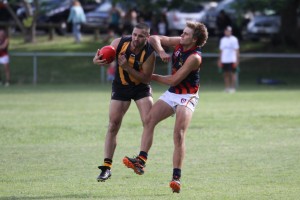 The long wait for Round 1 Season 2015 was finally over and a much anticipated Grand Final replay clash of the Tigers was another battle royal at Mott yesterday.

Both sides had refreshed their respective lists over the off season so there was much to be excited about to see who might get some advantage. The Noosa club have brought two big names into the competition in Brent “Beamer” Maloney and Rob “Bushie” Copeland to highlight the wonderful standard of footy on offer in this competition and they didn’t disappoint. Meanwhile the Mayne club also snagged some new talent in Ben “Bomber” Heffernan Roper and some lesser known names in Brisbane circles but they slotted into the slightly new look line up very well to be a good match up.

A large crowd turned out to see the big clash including a good contingent of Mayne past players eager to relive the 2014 grand final.

The first quarter was just as the billing suggested with both sides extremely hard at the footy determined to get first advantage. The quarter was almost a draw with Mayne going to the first break with a one goal lead.

The second quarter saw both sides expand their games. The Mayne Tigers took full advantage of the wind to kick away to a four goal lead at half time but it was probably the Mayne defence that provided them with the upper hand at that time with Tom O’Malley setting the tough example that he did so often last year. Caleb Brown was also a stand out whether down back or when pushing up field.

The premiership quarter, as it was in every clash between these sides last year an arm wrestle with neither side able to break away. It was a battle of the midfields and defence that everyone loves to see as the ball see-sawed backwards and forwards. Shaun Daly and Sam Paterson were terrific battling it out with an equally impressive Noosa midfield which included Maloney and Isles.

At the final break, both club’s supporters were tense and full of expectation as the game was there to be won.

The final quarter was again a footy spectator’s delight as both sides threw everything at each other to come home with early season honours. The Noosa side couldn’t quite get their radar right while the Mayne boys made the most of the their opportunities with Luke Faulkner in particular kicking away to another significant personal return with seven goals for the day.

Both clubs went away with something out of the game and everyone will look forward to the next clash up at Noosa in the second round.

Both club’s officials were very pleased with the day with a great crowd on hand to witness the quality of the footy in this competition. The Noosa club stayed back for a cold beverage and a chat about the game to cap off an enjoyable day’s footy, a now standard tradition developed in this competition.