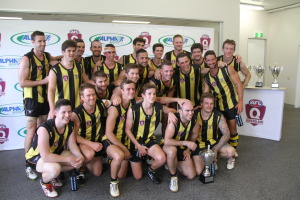 There was much speculation and anticipation surrounding the clash between the QFA North Premiers, the Mayne Tigers and the fast improving QAFL UQ Red Lions which was played at Yeronga yesterday.

The Tigers went into the game confident on the back of two strong performances in the preceding weeks while the UQ side are looking to increase their standings in 2015.

It was clear that the student’s plan for the Tigers was to restrict their avenues to goal with some strong defensive tactics. The first quarter saw the Tigers start well but the Red Lions regrouped better to go to the break with a small lead.

In the stifling heat it was always going to be a game of endurance and to see who would be the most capable of pushing the physical limits the hardest.

The Tigers came out after the first break determined to crack the Red Lions defence with a withering burst of pressure. The Tigers broke through the lines with sheer aggression and tackling pressure to create repeated turnovers followed by some straight kicking.

Whilst 2014 was dominated by the key Mayne forwards it is evident that the Tigers have many more avenues to goal in 2015 with goals coming off the half back and the midfield. The Tigers kicked away to a three goal lead at the half time interval to lead 39 to 20.

The Tigers didn’t release any pressure for the next quarter extending their lead to 5 goals and setting themselves up for a solid win.

The UQ Red Lions weren’t done however and came out hard at the Tigers in the last quarter but the Tigers steadied the ship to come home with a comfortable win.

Coach Shaun Daly was presented with the Alpha Sports Pre-Season Cup by AFLQ’s Craig Miller after the match in front of the Tiger’s loyal supporters who can’t stop pinching themselves with the ongoing success over the last twelve months.

The Tigers had a number of very good performances yesterday led by young ruckman Ben McElligot who gave the Tigers the first use of the ball for most of the day. The coach had his usual maximum number of touches and intimidated the opposition with his desperate attack on the footy while the Captain, Caleb Brown, was superb as usual creating opportunities from the back half and capitalising on them himself on occasions.

The Tigers go into the first round replay of the 2014 Grand Final against the Noosa Tigers full of confidence on the back of a successful pre-season. The Noosa club have recruited well and will be eager to get over their city cousins so the game shapes up as a classic encounter not to be missed.