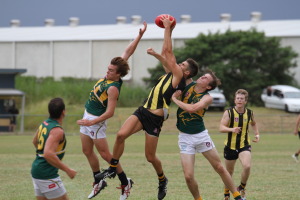 The second round of the Alpha Sports Pre-Season Cup clash between the Mayne Tigers and the Maroochy Roos at Zillmere yesterday was a much anticipated clash with both clubs looking to gauge their respective improvements since last season.

The Tigers got out of the blocks very quickly surprising the Roos with an eight goal to nil first quarter burst kicking with the aid of a stiff breeze.

Both coaches looked to re-group at the first break to keep their respective teams focussed for different reasons.

The Roos obviously had taken something from the chance to take a breath coming out with a quick goal followed up by another centre break.

The Tigers retaliated with a settling goal as the sky looking extremely ominous. Before the next bounce a frightening lightning bolt landed very close to the Zillmere oval with a correspondingly deafening thunder clap.

The umpires correctly decided that it was time to seek shelter for a mandatory half hour to allow the storm to clear. Unfortunately after the half hour expired the storm was still raging and the match was abandoned. The score was Mayne 9-6-60 to Maroochy 1.2.8.

The Maroochy Roos graciously conceded that the Tigers were in control of the game at the time of abandonment. The match was awarded to the Tigers who will proceed to the Alpha Sports Pre-Season Cup for Pool B.

The Tigers will now play UQ who defeated Robina in the other Pool B match. The Final game will be played at Yeronga on Saturday 28th March 2014 at 2.00pm.