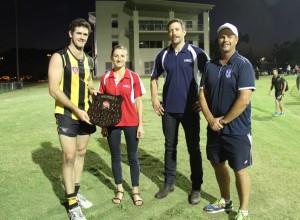 The Alpha Sport Pre-Season Cup kicked off yesterday afternoon for the Mayne Tigers with an important clash with the 2014 QFA South Premiers Springwood. The two clubs have had some big clashes over the years but none of those games had been played for such an important title. The Hart Sport Cup has been created to start the 2015 pre-season off with a marquee game between the two QFA conference premiers from 2014.

Whilst both clubs are still clearly in trial mode it was an opportunity to get some idea of how the sides are shaping up from the long break and for coaches and players to see themselves perform against quality competition.

The Tigers rested a few of their top guns however it was clear that Andrew Housego still hasn’t lost anything with the ticking over of another anniversary. Housego was a handful for the Pumas for most of the period that he was on the field attracting a couple of close checking defenders at times. He managed to kick three goals and take some trade mark hangers to set the scene for the new season.

Tigers Coach Shaun Daly took off where he left 2014 with a typical no nonsense game before taking himself off late in the day to get a look at the team under match conditions.

Whilst the Pumas got off to a slow start yesterday it was clear that they haven't lost anything over the break and will be hard to beat again this year.

The Tigers finished by kicking 14-13-97 to Springwood 6-7-43 to take out the honour of the inaugural Hart Sport Cup. A perpetual shield was presented to Coach Shaun Daly at the conclusion of the game by Natalie Martin of Hart Sport.

The Tigers will now stay in the Alpha Sport Pre-Season Cup and go on to play Maroochy in the next knockout round.