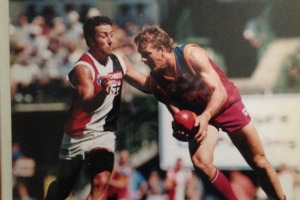 The Mayne Tigers are very pleased to welcome former Brisbane Lion, Dion Scott as a key player sponsor for 2015.

Dion is well known to the Brisbane football community as a tall key forward who played 73 games for the Brisbane Lions after moving up from the Sydney Swans where he debuted and played 6 times in the senior side.

Following his professional playing career, Dion went on to coach the Redland Bombers where he met and coached Luke Faulkner in 2001 and 2002.

Dion joins the Tigers to provide valuable sponsorship primarily in support of long standing friend and two time Mayne Tigers club champion Luke Faulkner, but also as a player sponsor for club favourite Sam Paterson. Sam is a wiry courageous midfielder who has twice achieved runner up best and fairest status in the Tigers club championship.

The Mayne Tigers are very proud to have Dion involved with the club and enthusiastically promotes the Pack-n-it business to all club and footy supporters. If you need packaging, then contact Dion on 0433 854 853 or email sales@packnit@gmail.com