Tigers take to the beach 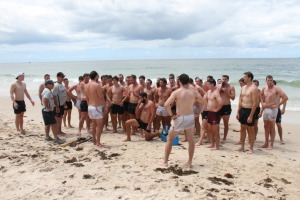 The quest for success in 2015 is well underway for the Mayne Tigers.

The playing group ventured to Bribie Island this weekend for a pre-season camp full of hard work and commitment to the cause. A turnout of fifty players plus coaches and managers attended the St Andrews Bribie Island Retreat and Recreation Centre, a purpose built complex equipped with a multi-purpose training room, kitchen facilities, sleeping units and assorted training aids.

The weekend was sponsored by the Mayne Past Players and Supporters Group as a key activity in their support of the Tigers in 2015.

Coach Daly set the scene early making this a compulsory activity for the playing group with a very good excuse for absence required. He was hence extremely pleased with the attendance with young and old making the trip.

Former Coach Mitch Ferguson, now a much sought after training and leadership consultant, was engaged to facilitate a session with the group taking them through a detailed workshop to assist them in working together as young men and understanding each other’s respective strengths and weaknesses. He was very pleased to comment that the club had selected a very strong and diverse leadership team exhibiting a broad range of attributes capable of supporting the playing group. Team leaders announced for 2015 were Caleb Brown, Luke Faulkner, Dean Hartley, Sam Paterson, Jack Collings and Zac McLean.

The visit to the Sunshine Coast beachside retreat wasn’t just about the classroom either with the team asked to perform a series of sand and surf activities which tested the group’s endurance, strength and mateship as they toiled in the hot summer sun in specially selected workgroups.

The boys were well catered for over the weekend by the skills of committee favourites Dick Fell and Leo Dennis with plenty of healthy food options.

A very successful weekend to start the season.