Daly goes back to back 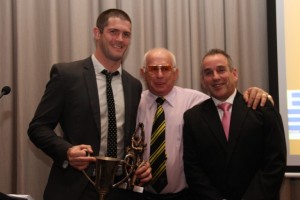 The Mayne Tigers Annual Champions Dinner for 2014 was a night for reflection on the best season of footy the Tigers had experienced in many decades.

In a fitting epitaph for the season, Coach Shaun Daly went back to back on his 2013 performance taking out the Keith Beavis Trophy for Club Champion for the second year in a row. The win was testimony to not only his on field performance but also his ability to manage the coach’s role under the weight of expectation from the broad church of Mayne Tigers past and present.

In what is becoming widely known, he is a man of some substance. Daly presented his Coach’s Address to the packed room at Victoria Park Golf Club detailing his thoughts on the last twelve months, providing an insight into the formula that brought the season’s success.

He thanked his coaching group and all the players for their commitment to the cause and urged everyone to come on board for 2015 with his customary passionate and deliberate follow me instruction.

Daly also picked up the Best Player in the Finals Series in hotly contested voting with so many strong performances in the group.

Luke Faulkner, the man who has won almost every accolade in 2014 took out the Mick Nolan Player’s Player Trophy in popular fashion for a stellar season. The name Mick Nolan is synonymous with the Mayne Tigers and there are now three annual awards presented in his name including the medal awarded in May for Best and Fairest in the Reunion Day game, the Best and Fairest Medal Awarded in the QFA North Grand Final and the Players Player Trophy. In 2014 Faulkner has made a clean sweep of these awards, a feat unlikely to be repeated. Faulkner also won the Duncanson Medal for Best and Fairest in the QFA North Competition for 2014, and the highest goal kicker award with a final effort of 136 goals. And as if that isn’t enough, the trophy cabinet goes to bursting point with the trophy for runner up in the Mayne Tigers Best and Fairest. The good news witnessed by everyone on the night is that Faulkner is going to go around again in 2015.

Club Captain Caleb Brown came third in the voting and received the very fitting award for Most Consistent Player in 2014. Brown led a star studded backline which provided the substantial base that the Premiership was built upon.

Josh Duffy was presented with the award for Best Clubman in recognition of his efforts on and off the field while Bill Stephens received the Most Improved Award. Another back man to receive due recognition was Tom O’Malley who picked up the Coaches Award.

Diminutive Corbin Sellen received the One Percenter Award for his extraordinary effort in preparation and desire to go above and beyond normal expectations. Sellen topped the tackle count by a factor of four in a herculean season’s effort.

Young Colt Zac McLean was awarded the Rising Star for his increasingly mature efforts as the season progressed including in the finals series. McLean was also awarded the Everton District Sporting Club Award for the emerging local talent most likely to play regular senior football.