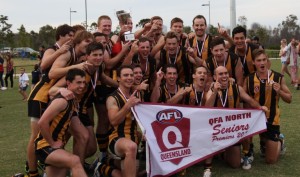 It has been thirty two years since the Mayne Tigers have been able to lift a premiership cup but finally the curse has been broken.

There was a sea of Black and Gold as the Mayne Tiger Army had taken over the Moreton Bay Sports Complex including local Member and Premier Campbell Newman and his wife Lisa decked out in club uniform. There were faces from all generations and eras of the Tigers past and present brigades to see if new history could finally be written.

As expected though, the Noosa Tigers weren’t just going to turn up and leave it to their Brisbane rivals. They came out firing from the start with each side hitting the score card six times but Mayne went to the first break in the lead four goals to two but there was much work to be done.

In the early part of the game, it was the youth of Zac McLean and the composure of Jake Magill that was keeping the Mayne side in the game with Luke Faulkner desperately trying to break the shackles of his hardworking and strong marking opponent.

In the middle, it was an arm wrestle as Coach Daly was also under close arrest requiring his running comrades to take on the game. Magill was terrific around the breakdown placing himself in the perfect position to capitalise and put the Mayne team into attack. Sam Paterson was receiving no favours from past teammates which only spurred him on more to be a pivotal player in the teams attacking raids and defence.

Nevertheless, the arm wrestle continued to half time and a four point lead to Noosa.

The third quarter was another tight tussle with both sides having a three goal for goal shoot out leaving Noosa with a narrow margin at three quarter time with a five point advantage.

The Mayne three quarter time huddle was enormous leading to a mighty Tiger roar that reverberated around the ground. The Tiger Army were there for success and gave the team every confidence that they could overcome this willing opposition.

The youth of Henry Leong was the spark that the team needed with a multiple touch run and goal lifting the emotion and a shift in the momentum that was needed.

Another two quick goals and the Mayne boys were on the prowl breaking out to a nineteen point lead. However, a simple indiscretion led to a free kick to Noosa from the ball up and a quick goal.

However, nothing was going to stop the Mayne boys now as they piled on another four goals including a mighty fifty metre left footer from Luke Faulkner to seal the deal and the premiership.

Faulkner was terrific all day finishing with eight goals despite his opponent being one of the Noosa best as well. Faulkner added to his 2014 honours list with a Best on Ground Medal winning the inaugural Mick Nolan medal presented by Nettie Nolan and Ricky Nolan. Also up forward, a young and athletic Fraser Thompson was a focal point bringing down some exciting marks in a look to the future.

The Mayne backline deserve credit for keeping the team in the game with Dean Hartley again tremendous out of the group that have been the springboard of the side all season.

Coach Daly soaked up the pressure he seems to enjoy to lead the Tigers to victory in a great grand final display from both clubs.

After the final siren sounded it was jubilation tinged with relief as the true believers shed tears of joy to see this long awaited victory finally become a reality.

Dom Smith was awarded the Best on Ground in the Reserve grade game adding to his premiership medallion in a terrific performance.