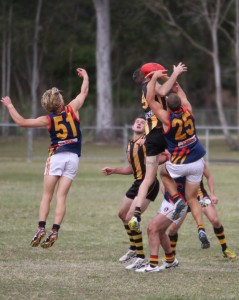 In perfect conditions and in front of the biggest crowd seen at the Den, the Mayne Tigers took the honours over the Noosa Tigers to progress to the Grand Final.

The game was preceded by photos of Premier Campbell Newman, the Club Captains Caleb Brown of Mayne and Peter Trompf of Noosa and the Umpires. The Premier kindly performed the official coin toss to get the game underway.

The Mayne Tigers got off to a fast start to lead by four goals before their Sunshine Coast cousins fought back to go to the first break at even money setting up an enthralling encounter.

The Noosa club had the small wind advantage in the first term but it was the home team that grabbed the acendancy in the second kicking three goals to nil. A little more accuracy by the Mayne boys could have provided an imposing lead at that point had the five additional points been converted.

It was obvious from the start that the Noosa Tigers had set out to rattle the locals with some heavy checking making the enthralled crowd wince and groan. This might have worked in past seasons but this is a much more mature and disciplined group with plenty of composure and a strong resolve.

The work around the stoppages was a credit to the midfield group as Coach Daly once again used his strong body to advantage to gain first use of the ball and force it forwards. Corbin Sellen once again led the tackle count to achieve multiple turnovers which the Mayne side put to good use.

As has been reported all season, the backline has been the base that the winning formula has been developed upon. The experience of Dean Hartley and Caleb Brown shone through as they repelled countless attacks where the Noosa team were unable to gain value from their hard work up the ground. Tom O’Malley, Ben Davies and Bill Stephens were also playing critical support roles to keep the opposition score around the season average as they take pride in their work.

A return to the senior list in this critical match for Sam Paterson was a very popular result after three strong performances in the twos. The inclusion of Paterson gave the home side another quality midfield option who critically is a ball getter and uses the ball with purpose.

The third quarter saw the Mayne team break away to a handy eight goal lead. Luke Faulkner worked hard all day to shake his young opponent but let loose with a run of goals to finish the game with another handy six majors.

Mayne now enters the Grand Final with an unblemished record for the season and a week off to prepare for this important game.

The Grand Final is scheduled for the 13th September at the new Burpengary ground and all Tigers supporters are encouraged to make the trip to this great new AFL facility to cheer the Mayne boys on to success.