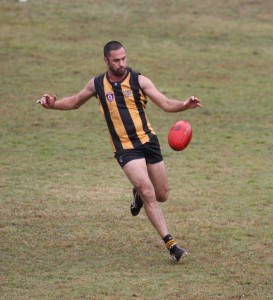 Luke Faulkner added another award to an already impressive trophy cabinet when he took home the Duncanson Medal for the Best and Fairest Player in the QFA North Competition for 2014 tonight at the AFLQ Football Awards Presentation Dinner at the Gabba.

Earlier in the evening Faulkner secured the Highest Goal Kicker Medal for the competition with 122 goals accumulated at the end of the home and away season.

In his customary fashion, Faulkner humbly thanked the club, his fellow players and family for their support over the course of the season.

The vote count came to a cliffhanger finish with Coach Shaun Daly two votes behind after securing 3 votes in the final round to finish on 20 votes with Faulkner getting the next two votes in the same game to hold the lead by just two votes to go to 22 votes.

Club Captain Caleb Brown came in fourth after leading the count earlier in the night to give the Tigers three of the top four place getters.

The last Mayne player to win a League Best and Fairest was Andrew Housego who took home the former Duncanson Todd Medal in 2005.

The Tigers now look forward to the first finals appearance this Saturday at the Den in the Battle of Tigers.