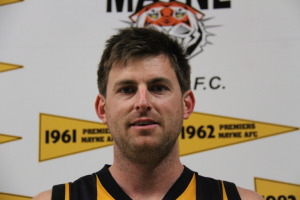 The Mayne Tigers celebrate another milestone game this Saturday at the Den with club favourite Luke Ferguson taking the field for the 150th occasion.

In a particularly challenging period of the Tigers history, survival has been a much laboured description of the post 2000 period. However, this unfairly represents a period where tremendous and enduring relationships have been forged. Opposition clubs have often marvelled at the inner workings of the Tigers wondering what has kept the club together during this period.

One of the central characters in this story of the last dozen years has been Luke Ferguson, someone who has been more than a club champion on the field, he has been a key ingredient to the Tigers recruiting and retaining quality players and people. He has gathered and fostered genuine enduring friendships to help build the sort of team and club that he wanted to belong.

To have played 150 senior games at a footy club is a brilliant achievement although it is suspected very few would have lasted had they experienced the topsy turvy journey that Luke Ferguson has endured. Recruited from Cairns and starting in the State League in 2003 under Rob Dickfos, he duly won the club champion award playing as a jumping jack ruckman and even secured a top 5 place in the Grogan Medal with 10 votes. A feature of Luke’s game through the ages has been his marking and agility and the occasional burst of speed. Having kicked 202 goals in his career to date and in line to kick 50 goals this season as a half forward, Luke is having another strong year and as usual, doing everything required to impress his team mates and coaches alike.

All the Tiger faithful will be cheering for Ferguson this Saturday and hoping that this will be the season that he gets his due reward.

In a testimony to the regard that Ferguson is held, the following quotes have been provided by some of his team mates and team officials over the years.

I think Luke is the best teammate I've ever played with in any sport. He is the absolute definition of the glue which binds suburban and country footy clubs together and is the sole reason behind a number of players including myself offering years of service to the footy club.

He's also been an outstanding player with the unique combination of having a glittering highlights reel as well as being a team person with the club being his first priority. Blessed with great hands, good skills and unbelievably agile.

If it wasn't for L.Ferguson I'd be back in Cairns working at the local servo living in Edmonton.  Great man great player.

Luke is one of the true nice guys around the club, he always is the first to go over and introduce himself to a new player, he takes a real interest in the lives and wellbeing of his teammates (from first gamers to blokes who have played over 200 games) and he is an extremely loyal servant of the Mayne Football Club.  He is one of the funniest people you will ever meet, which is supported by the many mentions he has gained from the 100 gamer’s questionnaire and the endless laughs he provides in the change room.  As is the case with most things Luke does his football rationale is in a word “unique” and over the years I have seen him do some of the most amazing things on a football field, but Luke is also known for producing some of the more humorous moments in a footy game as well.  From a personal perspective I have been a part of almost all of his 150 games and am an avid fan of the passion Luke plays with and his attitude is to always put the team and his teammates first no matter what the situation.

Luke is a loyal and entertaining tiger, who brings his teammates into the game with his footy smarts. He is capable of producing his unstoppable best and his worst in the same quarter.

A fantastic team man. Does a lot of great work off the field building team harmony. Has a prodigious kick and plays a good linking role. Helps make Forks look good! Is fitter this year than I've ever seen him. Also provides a good introduction service into the Firebirds for the lads!

One of the most influential people on and off the field that The Mayne Football Club has seen in its time, always finds the best in people and very entertaining.

Possibly the most Skilful, Flashy and unique footballers I have ever played with, off the field probably the funniest bloke I know.  Privileged to call him a mate.

Luke is a player who always wants to help others and to improve everyone on the team. He is a character that brings laughter around the club and is much loved by all who have played alongside him. You know when you play with him that he gives it his all and sticks up for his teammates. He doesn’t leave a man behind.

I would class Luke as one of my good friends, legend on and off the field – organized the best footy trip I’ve ever been on! Just an all round great guy and it’s been an honour playing alongside him.

Luke’s (Chef Dewberry) contribution to the Mayne Footy Club cannot be quantified. His impact and ongoing dedication to his team mates is perhaps best measured by the extreme length of his ‘sniffer’….extraordinary.

Luke’s 150 games have been an endless highlight reel of towering marks, freakish goals and down-right strange celebrations. But his time at Mayne has been so much more than showcasing his entertaining skills and antics. It is important to recognise the opportunities he has created for team mates outside of footy and his capacity to bring people together and laugh over some of his infamous Hot Wings.

Fergo is a once in a generation player whose bashed body and courageous mentality continue to entertain the Mayne faithful. It has been a pleasure to pat the No. 45 on the back at the end of each game. Look out for Luke sinking a few ‘Cans’ at the Press Club in combination with some uncanny dance moves post-match.

A great team man who always pushes the ideas of having fun, enjoying footy and the company of your mates. Ordinary on the 8 ball table, brilliant in the veggie patch and a connoisseur of coca cola and spirit beverages.

Luke has been a club favourite from the moment he arrived on our doorstep in his trusty red rocket, after a mammoth road trip from Cairns.

His exciting and physical brand of football endeared him to supporters immediately, while his loyalty and generosity to his teammates over the course of some 13 years, ensured that he is and will always be held in the highest possible regard by those players fortunate to have played alongside him.