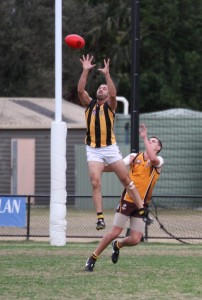 It took a week longer than anticipated but Luke Faulkner reached the club record of 113 goals in a season held since 1983 by club legend Dale Woodhall yesterday at Graham Road against old foe Aspley. Faulkner came into the game on 112 goals and kicked his second goal in the second quarter to surpass the record. He went on to score a further five for the day and finish on 119 for the year to date.

The Tigers got off to a strong start with a six goal to one first term and it looked like it was going to be a clinical affair with all the plans being executed to method.

However, the Hornets had other ideas and weren’t prepared to surrender so easily. For the second week in a row the Tigers let off the gas in the second term to allow the opposition back into the game. The workrate of the first quarter wasn’t sustained which allowed the Hornets a small window of opportunity.

Whilst the Tigers were still putting pressure on the Aspley backline with plenty of forward raids they couldn’t apply the knockout blow required with inaccuracy taking its toll. At the other end the Hornets kicked truly to record five straight goals and win the quarter to go into the major break with some degree of confidence.

As has been the case throughout the season, any momentary lapses have led to the appropriate corrective actions and behaviour.

The third term revival was hoped for by the Tiger faithful and they weren’t disappointed. A return to the application and endeavour of the first quarter was immediately evident after the main break leading to a seven goal to two return and any hope of a contest was extinguished. Faulkner was able to break loose from his determined opponent to kick three of the Tigers seven goals for the quarter.

Once again the Tigers were well served by their running brigade with Nikos Keim and Dom Smith capable and creative out of the middle and around the ground. Keim chipped in with six goals as well to be judged the Tigers Man of the Match.

Josh Duffy, always creative, had one of his best games for the Tigers in and around the stoppages and was a great foil for his best mate Shaun Daly as they worked their magic together with multiple touches.

Caleb Brown was ever reliable leading the tight backline and was rewarded with another session up forward late in the game.

It was young Bill Stephens 50th appearance for the Tigers and he was as usual, reliable and steady down back.

The Tigers head into the final fixture for the season with plenty of confidence but it is with no fuss and business as usual. The final game is at home against local rivals Kedron. It is also another milestone game for the Tigers with club favourite Luke Ferguson set to play his 150th game while Corben Sellen will record his 50th appearance.