Tigers made to work hard in Coast Clash 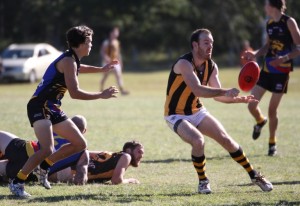 It wasn’t until the third quarter that the Tigers could break loose of a determined Panther outfit in a gripping clash of the cats at North Street Oval yesterday.

The Tigers got off to a reasonable start in the first term aided by a two goal breeze, with the usual suspects contributing to a three goal lead at the first break. However, the Panthers had other ideas showing they also had a handy avenue to goal with teenager Eric Hipwood proving to be a handful for the Tigers.

The Panthers stole the honours in the second quarter reducing the Tiger lead to just eleven points at the main break setting up an exciting second half. In one of the few quarters that the Tigers have conceded this season, it was the backline soldiers Spencer Greville, Bill Stephens and Tom O’Malley who continue to prove that success is built on solid defence.

Some half time changes and some stirring encouragement from Coach Daly delivered a much different result in the third quarter with a nine goal burst snuffing out any further challenges from the Caloundra boys who could only record one goal for the quarter and lament what might have been.

The Tigers really did turn it on in the third stanza with a thirty percent increase in disposals over the previous and three times the number of tackles to pressure the opposition out of the footy and create the opportunities necessary to change the game.

The slicing runs from defence and the acceleration of Spencer Greville were a highlight in the second half particularly which set up the win while Dom Smith was one of the shining lights in the midfield as he took on the opposition to create more run and carry to turn the opposition around.

Zac McLean was again a creative contributor repaying the faith that the Tiger hierarchy have in this young man.

In a congested forward line up it is not often that the small forwards get to shine but this was the case yesterday as Liam Bourke worked hard to keep the footy in the forward fifty and create avenues to goal for his team mates.

One of the most pleasing outcomes from the day was a spread of goal kickers with twelve players recording a major for the day.

The ruck division was well served by big man Luke Howard who also helped himself to a couple of goals when he spent some time up forward.

The Tigers head off to Aspley this week in the penultimate round of the season.