Tigers made to work by courageous Blues 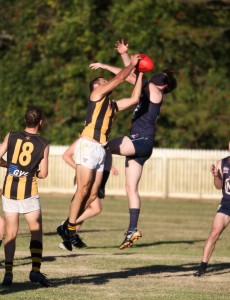 In stark contrast to the week before Mayne ran out comfortable winners against a young and inexperienced Nambour outfit who, whilst well beaten were courageous to the end at Palmwoods yesterday.

It was another Faulkner and Housego show with both key forwards being on the end of the relentless supply of possession with the former going on to kick another 8 goals to retain his season average while the latter kicked a quick fire four before sitting out the last period of the game to keep fresh for coming weeks.

The backline was a little surprised by the young talent on show from the Blues and needed to step up a gear to take control. Tom O’Malley was once again his ever reliable self coming out of the defensive line repelling the Blues attack and turning it into attack at will. Ben Davies was busy and with his reliable skills has really cemented a spot as a small defender.

In the middle, Shaun Daly racked up a season high possession count as he created opportunities around him, linking up to his young team mates around him. The midfield support of Jake Magill and Jack Collings was superb as they also achieved high numbers but it was their ball use which pleased the Tiger heirachy particularly after the first break.

The young brigade lead by Zac McLean continue to grow in importance to the team and his performance in particular showed great maturity and confidence yesterday.

The Tigers return home to Mott Street next week with Luke Faulkner sitting on 93 goals for the season thus far. Faulkner kicked a season high of 14 goals last time the Tigers met the Caboolture Lions so there is every possibility that he could tick over into three figures this coming week. This is an exciting distraction for not only Faulkner as the club dusts off the record book again. The last time this milestone was achieved was way back in 1983 when Dale “Chook” Woodhall kicked 113 for the Tigers. It was also the only time a Mayne player has exceeded 100 goals in 90 years of the club’s history.