Mayne snatch vital win in top of the table clash 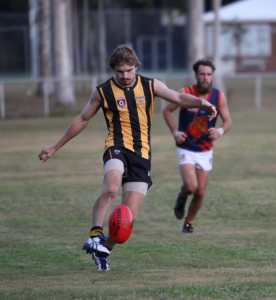 In a withering burst of four goals in the last two minutes of their clash with Noosa, Mayne snatched a vital victory to retain their unbeaten record and push three games clear at the top of the ladder.

Noosa burst away in the opening quarter to take a ten point lead at the first break and set the scene for an exciting game. Both clubs were missing some important talent but it was clear that they each sensed the importance of the occasion and there was not going to be any excuses acceptable.

It was a gripping battle of the midfields all day as each fought for ascendency. Mayne coach Shaun Daly was closely checked but still managed to play a pivotal role in proceedings to influence play throughout the day while Nikos Keim was again busy creating opportunities around the stoppages to also play an integral role against the quality opposition.

Tom Falconer was his usual creative self and has been a very handy mid season addition to the Tigers.

In a different looking forward line with Luke Faulkner having a rest, the Tigers proved that they have other avenues to goal, utilising seven goal scorers in the 12 goal game. Taylor Murtha played an important role kicking 3 goals at centre half forward while Spencer Greville played his best game this year to take out the best player accolade for the day.

The backline was without Captain Caleb Brown, also having a break, but the experience of Tom O’Malley and Dean Hartley showed through to limit opportunities.

However, it was the last half of the last quarter that had both club’s supporters on the edge of their seats. Mayne lead by 10 points at the last break which was whittled down to 5 points as the game moved into time on. In a freakish kick for goal, Noosa were able to take a one point lead with two minutes and ten seconds left on the clock.

Noosa supporters were elated while the Mayne supporters could only look on in hope for a miracle.

The next two minutes were pure magic for the locals as four centre clearances lead to four goals. The first clearance ended with Spencer Greville kicking a major to regain the lead and ignite the team. This was followed by Ben McElligot winning the ruck and following up his own hit out to score a running goal. Big Luke Howard got into the action crumbing a ball and kicking truly. The icing on the cake was a very composed mark and goal from young colt Zac McLean from outside the 50 to seal the game before the siren sounded.

Really great to see the Noosa guys staying around for a drink to watch the awards presented even though they had a long trip home.