Tigers do it for Housie 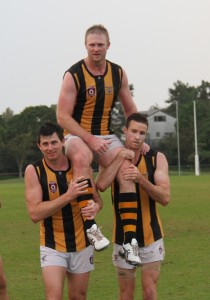 It was a very special day for the Mayne Football Club with Andrew Housego lining up for his 250th appearance and nobody was going to be the one to let him down.

The only thing working against this special event was the weather as a sleety cloud moved in just before the game and a miserable drizzle started.

Whilst the Roos were determined to do their best to halt proceedings, the boys in black and gold were relentless, proving to all that it didn’t matter what the occasion and how physical the game might be, they would not be stopped.

Once again, this was a strong win built on a backline determined to blanket any opposition raid. Caleb Brown showed every one of his many skills as he stepped and weaved around his opponent. But it is the way that this defensive group work together that is making it so difficult for oppositions to score . Dean Hartley was once again miserly while Ben Davies is revelling in being a member of this group once again putting in a key performance.

In the middle, it was a small man’s day with a lot of footy on the deck due to the slippery conditions. Nikos Keim, for the second week in a row was outstanding, emerging from places that he shouldn’t dare to travel picking up the hard balls for his team mates. Jack Collings also played a critical role around the tough stuff and was instrumental in the result.

But it was Luke Faulkner, thinking he was back in Tassie, again making the most of the forward pressure to kick yet another bag ignoring the conditions.

The next game is the battle of the top of the table with Noosa at the Den.