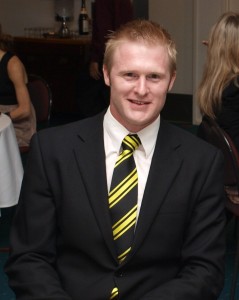 One of the all time greats of the Mayne Tigers AFC will chalk up game number 250 on Saturday at Maroochydore. Come the first bounce 35 year old Andrew Housego will play it as he always has – with a steely desperation at the contest, iron willed determination and a commitment to the cause that has never waned in 18 years of senior football. To have watched any of the preceding 249 games would provide a highlight reel in itself. Typically there would be a classical contested mark of the football with arms outstretched well beyond the reach of his hapless opponent. A measured run up precedes a booming kick at goal, defensive attributes that extend beyond the bone jarring tackles and physicality at the contest, a “measured” discussion here and there with the umpiring fraternity – all form part of the Housie package. The man defines resilience, durability and loyalty in a day and age where society perhaps does not. His ability to defy the odds time and again in getting up for a game when it appeared an ongoing niggle, strain or cork may have ruled him out, is legendary. Memories of game 150 stand out for those in attendance where he single handedly dragged the Tigers over the line at Everton against old foe Sandgate, battling a shocking ankle injury all week in the lead up.

Nevertheless, for a man who has played alongside hundreds of players over the years, including a record breaking 11 year tenure as captain, very few could or would claim to “know” the great man. Perhaps this in itself provides an insight into the construct of Housie, a man by his own admission “…don't need a lot of motivation, other than pride in my own performance.”

One of the enduring images for many of his teammates is of their great leader arriving to the game in a tiny Ford Festiva sedan which somehow accommodates his lithe 195cm frame. Despite a very recent upgrade Housie has stuck with the economical Festivas for almost 16 years. For those of us game enough to share a ride with Housie would find that nothing prepares him better for battle than a Keith Urban or Garth Brooks classic. He is a very accomplished Karaoke singer, a dreadful right hand lower order batsmen, talented MC, husband of Jodie and father of 2 beautiful children in Spencer and Abigail and hopeless at golf. Housie is sensational company on all too infrequent (but perhaps with good reason) nights on the town. His loud and infectious laugh and boundless energy ensure a brilliant time for all. At nearly every club function Housie will slip quietly out the door to catch the 12:30am train home to Nudgee where he settled some years ago. No fanfare or fuss.

Whilst the local footy landscape has changed over the course of his career many of the Housieisms have remained the same. He would at best have worn no more than 4 pairs of boots in his entire career, which could have been an economical choice as much as superstition. He will warm up before training for no more than 30 seconds before leaping into lane work and for the last 10 years of his career has won the coveted “biggest hit of the year” award for his on field exploits. Rarely sighted before March each year in pre season Housie seems to take great delight silencing the knockers – always posting an incredibly quick 3km time trial albeit under the whip from 1200m out and carrying a generous Xmas spread across the girth.

You would be hard pressed to find anyone in the competition with a bad word to say about Housie.

When asked to reflect on his 249 games to date Housie has placed the milestone very high up on his list of achievements. He is particularly pleased to be sharing the day with Luke Ferguson and Caleb Brown the only survivors of the team from the old State League days. Whilst he hasn’t ruled out a tilt at the all time Mayne Tigers games record of 284 games, for the moment Housie is happy to be playing with his mates and preparing for a long overdue tilt at the ultimate success this season.

In a week where one of the Brisbane Lions’ all time greatest players has retired, one of the most respected players in the local competition will clock up a well deserved milestone.