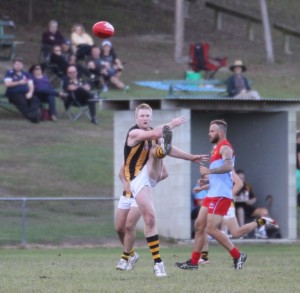 The Kedron Football Club had prepared well for the clash with the Tigers in their first home game played between these two proud clubs since 1989. The Lions stunned the Tigers with their attack on the footy and run and carry to take a quick lead mid way through the first quarter.

The Tigers brains trusts had to scramble quickly to make the necessary changes to take control over the game and pull back the lead to go to the first break with a four point advantage.

After the first break it was all Tigers as the visitors kicked 7 goals 8 behinds in the second quarter with Andrew Housego and Luke Faulkner putting on another clinic as the Redleggers struggled to get any quality possession in their forward half.

Captain Caleb Brown led his backline from the front to blanket any chance of a revival from the gallant opposition. Bill Stephens was miserly while Tom O’Malley, Dean Hartley and Ben Davies operated as one to dominate their opponents after the first break only letting another 2 goals past them in a familiar story.

The midfield received a huge boost with Nikos Keim returning to the firsts after an injury forced layoff and a quick tune up in the twos last week. Jack Collings was superb in his tagging role nullifying the impact of the classy Kedron midfield, a role which he is becoming an expert.

The Tigers now prepare for Andrew Housego’s 250th game next week against Maroochy at Maroochy. All Tiger supporters are encouraged to come along and cheer on this loyal Tiger. He is in vintage form having kicked 5 and 8 goals over the last two games respectively.