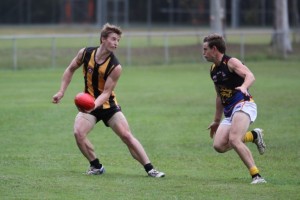 In another efficient display the Tiger backline stifled any opportunity for the Caloundra Panthers to mount scoreboard pressure. Bill Stephens lead another miserly effort from the stable back six of Tigers with Dean Hartley and Caleb Brown also taking honours to contribute to a comprehensive win at Mott Street yesterday.

The Caloundra Panthers were down on some of their regular talent with key injuries but some of their younger brigade showed they have plenty to offer and will have benefited from this outing to give their selectors something to think about as the season rolls on. They were far from disgraced but were unable to capitalise on good work in the middle to get on the board often enough.

Mayne ruckman Luke Howard put in another consistent effort to lead his midfield and provide plenty of opportunities for his running support. Dom Smith continues a stellar run in the midfield and once again gave the forward line good service.

In the first week since round one the Tigers enjoyed the services of Faulkner, Ferguson and Housego combining together. The veterans helped themselves to plenty of the incoming ball to accumulate ten goals between them but accuracy saved the Panthers with an almost equal number of points being recorded by the experienced trio.

Young Jack Collings was in everything as well contributing with defensive pressure around the middle and pushing deep into attack.

The competition will enjoy a weekend off as the representative weekend looms large. Queensland play the VAFA at Burpengary in the match of the day on the 8th June while SEQ plays Nth QLD in the curtain raiser. Eight Mayne Tigers have been selected in the SEQ squad.