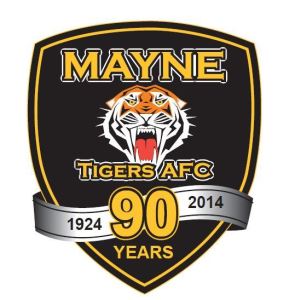 The Mayne Football Club comes together this Saturday, 24th May, to once again celebrate the memory of Mick Nolan, the last Premiership Captain Coach of the Tigers.

The Mick Nolan Medal is awarded annually to the player adjudged to be the best and fairest Mayne player in the home game played closest to the date of Mick’s passing. Mick passed away on the 27th May 2008. Mick Nolan moved to Queensland to take over the reins of the Tigers after an illustrious career with the North Melbourne Football Club where he played an integral role in securing their first premiership in 1975. He steered the Tigers to a Premiership in 1982 and subsequently coached the Tigers for many years and played an important part in the survival of the club.

This day has evolved into a day of reunion for Mayne Tigers of all ages, sometimes celebrating significant milestones, or just as importantly rekindling old friendships forged in black and gold. In the year 2014, the club also celebrates 90 years since being formed in 1924. The club expects a large roll up of members and supporters to cheer on the 2014 Mayne Tigers as they take the field against the Caboolture Lions at 2.00pm.

All Mayne Tigers, young and old are encouraged to join in the day which commences with the Colts kicking off at 9.45am, followed by the Reserves at 12pm and Seniors at 2pm. Formalities commence at 1.30pm.