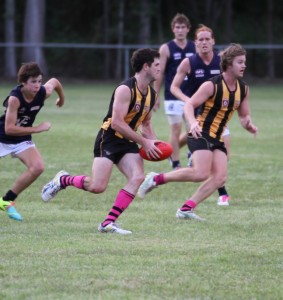 Coach Shaun Daly stressed to his charges before the clash with the Nambour Blues at the Den that everyone must adhere to their team role and no diversion from the team objective would be tolerated. In an eleven goal to nil opening term he got exactly what he asked for to put any chance for the Blues out of the question.

This was the annual Ladies Day event with all proceeds going to the McGrath Foundation. The Tigers wore pink socks while the Blues got into the spirit of the day wearing pink laces and also donating to the cause.

In a game where the home side dominated by such an extent it was impossible to find a player who did not perform from the once again miserly backline lead by Captain Caleb Brown to the unstoppable forwards of Faulkner and Ferguson.

Gawler recruit Luke Howard once again impressed in the ruck, around the ground and in a stint up front capturing three goals.

The honours did belong to the midfield lead by Daly and Dom Smith who controlled proceedings to continually drive the ball forward and provide the linkages for the attacking raids emanating from the backline. Gabe Dillon did a power of work as well to figure in the dominant group as did Corbin Sellen in what is becoming a repetitive comment.

The Tigers meet the Caboolture Lions at the Den next week in the Annual Mick Nolan Medal Day and Tiger Reunion. The Tigers look forward to seeing Tigers, young and old at this 90th Year Reunion Day of the club.