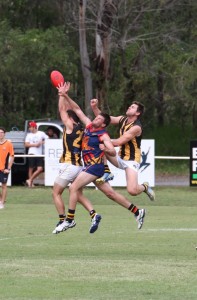 In a battle worthy of a top table clash, the city based Mayne Tigers reigned supreme to secure outright first spot and remain undefeated after six rounds.

In a sometimes spiteful affair, there was no quarter given or asked by either side.

Mayne got off to a good start to lead the first quarter with a two goal margin on a fast track and the game was set for a wrestle. However, Mayne could not trouble the scorer in the second stanza while Noosa looked too strong and too fast piling on five goals and taking an effective four goal lead at the main break.

Coach Daly gave an impassioned speech to all his charges to want the ball and want to win. This is exactly what he got with Noosa only able to score two more goals for the second half while Mayne kicked away with four and six goals respectively to win an emphatic victory.

Luke Howard in the ruck provided the dominance needed in the big man division around the ground as well as in the air and is now really earning his stripes while serial pest Corbin Sellen once again was in everything creating turnovers and opportunities to keep Mayne in the game.

Evergreen Luke Faulkner maintained his average with seven more goals despite plenty of attention from a quality backline.