Tight tussle at the top 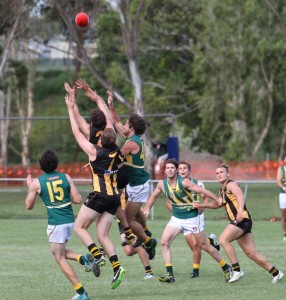 In a closely fought encounter for most of the day, the Tigers ground down Maroochy to break away and record a strong win at the Den.

Once again the back line remained rock solid allowing the Roos forwards little air holding them to a miserly two goals for the day.

The gusty conditions were particularly tricky adding another dimension to the game which both sides found difficult to master.

Dean Hartley was a stand out down back, but as usual the Brown, O’Malley, Stephens combination with the insertion of Ben Davies this week were working with him as a team to deserve credit for the ultimate result.

Coach Daly, once again racked up possessions at will recording forty two touches for the day in what seems like a team rule to go through him. He was well supported by Jack Collings in and around the middle while Ben McElligot continues to play a strong role.

Corben Sellen didn’t put a foot wrong all day and was once again at the head of the tackling list creating turnovers and defensive pressure all around the ground.

Up forward, the two Lukes didn’t have it all their way this week as the Maroochy backline had a plan which they executed all day to restrict the Tigers to their lowest return so far this year and make the game a fascinating contest to watch.

It is a battle of the Tigers next week as the club heads off on the hardest road trip of the year to Noosa in a battle for the top. Both teams are five from five and it promises to be a fascinating contest.