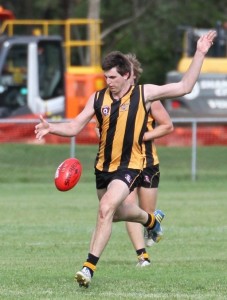 For the first time in around 20 years former inner north side arch rivals Mayne and Kedron clashed at the Tigers home ground yesterday.

After a hard fought contest the Tigers prevailed by 40 points scoring eight goals to three in the second half after the Lions had worried the home side with their commitment to the contest and their skill level with ball in hand.

The Tigers fitness stood them in good stead on another humid day, although at times they were ragged under pressure, something that they will have to alleviate from their game if they want to play and do well in finals.

Billy Stephens was superb down back with his disciplined play, courage and closing speed.

Luke Faulkner and Luke Ferguson were strong key forward targets sharing 12 goals between them, whilst coach Shaun Daly was his usual industrious mid field self with 30 odd touches.

Others to do well were Taylor Murtha with his dash, skill and reading of the play across the mid field and at half forward, Corbin Sellen who played his role well, and Ben McElligott who was good in the ruck after being crook all week.

Jack Collings also had plenty of the footy, but his performance was marred by being sent off at the start of the last quarter.

This week we host another contender in Maroochydore, at Mott Street, who will be on the rebound after a narrow loss to Noosa.