Tigers too strong for Hornets 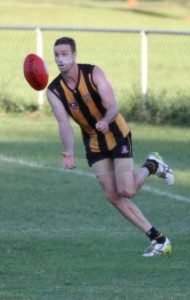 For the third week in a row the Tiger backline was almost impenetrable. Tigers Captain, Caleb Brown led his team to another strong win blanketing the Aspley Hornets forward line out of the game to record a big win at the Den.

At the other end of the ground, the return of Luke Faulkner gave the Tigers too many avenues to goal for the Hornets backline to manage returning a personal haul of seven goals.

However, the Hornets didn’t give it away at any stage battling it out right to the last minute despite the oppressive April conditions.

In the midfield, once again Daly was strong while his capable partner Nikos Keim was at his creative best orchestrating attacking raids for the forwards to capitalise upon.

Dean Hartley and Tom O’Malley along with Bill Stephens make up a miserly group down back and need to be praised for the way the team is performing.

The squad go into the Easter break with three solid wins and will look forward to the local derby with old rivals Kedron on the ANZAC weekend in a clash that hasn’t taken place for over two decades.