Tigers work hard to get over Panthers 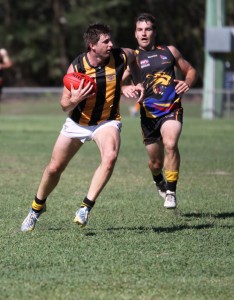 The Tigers forward line was again served very well by it’s veteran contingent with a nine goal effort by Luke Ferguson. Ferguson was unstoppable in a flawless display in the spearhead role.

The Tigers were without Luke Faulkner and Andrew Housego, both absent due to family commitments, taking out the double figures return of the prior week, however Coach Daly prior to the game was very positive about the opportunities that would bring to a couple of young Tigers seeking their first grade opportunity.

However, it wasn’t all one way traffic as the home side worked hard all round the ground to create their own opportunities and didn’t give in at any point. The battle of the midfield was critical in the first half of the game and Daly proved to be the difference winning countless contests to drive his team forward to create multiple forward entries. He was well supported by Nikos Keim who is relishing his opportunity to work in and around this sort of experience and together they make a potent midfield combination.

It was at this time that the Tigers perhaps wasted a lot of their opportunities by trying to share the possession around too much but the success starved Tiger supporters won’t be complaining about that sort of problem.

In another miserly performance the backline lead by Captain, Caleb Brown, shut down all avenues to goal, blanketing the Panthers in almost every opportunity they created. Brown had his two ever reliable key men in Dean Hartley and Tom O’Malley working in sliding defence around him to play pivotal roles in the Tigers rebound work.