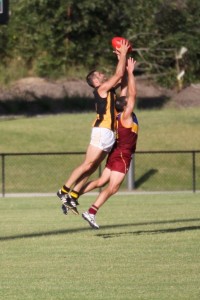 Luke Faulkner started the Tigers season with a vintage display. Faulkner came to the Tigers in 2010 with an impressive record as a leading goal kicker and yesterday the crowd at Burpengary were treated to as a good a display as you could hope to enjoy with all his tricks on display.

The Caboolture Lions had no answer to the Tigers key position men starting with dominant displays down back from Captain Caleb Brown at centre half back letting nothing past as he marshalled his backline troops to enforce a miserly result.

But up forward it was the Faulkner and Housego show as the scores were racking up with unrelenting forward momentum driving the ball their way.

Faulkner finished with eleven goals and Housego five with a further nine goal scorers which would have pleased the Mayne coaching group.

New Coach Daly dominated centre clearances leading the midfield in the early stages of the game until the result was beyond doubt before going forward to cap off a very solid start to his coaching career with two goals.

It was a dominant display all round but there were no big celebrations after the game with recognition of plenty more work in front of the squad to come.