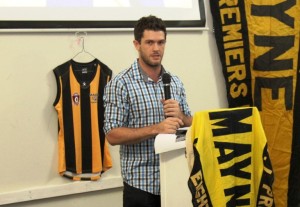 New Coach Shaun Daly urged players, officials and supporters to want and expect success in 2014 and not be satisfied with anything less.

A crowd of 120 players, officials, family and supporters were treated to a good old fashioned oration full of passion by Daly in his inaugural coaches address at the 2014 Mayne Tigers Season Launch and Jersey Presentation.

The night was attended by 1973 Premiership Coach David Cearns and three of his team mates in Graham McColm, Greg Street and Peter Clay who were heard to be considering a comeback after the new Coaches call to arms.

MC Danny “Chippa” Craven took the audience through a special night of introductions starting with the new Colts team for 2014. This was followed by a gourmet’s delight put on by Sponsor, Treasurer and Chef Extraordinaire Guy Gardner and his able assistants Sandra Gardner and Albert Thompson. It seems that a good spicy curry is now becoming the food of choice at Tigerland.

The glittering line up of stars presented with their 2014 jerseys commenced with 243 game veteran Andrew Housego as number 1 jersey holder in his 18th season of senior football. Andrew looks as good as ever and is once again raring to go and looking for success, something every Tiger supporter wishes for him.

Other well credentialed players to receive their jerseys were former best and fairest winners, Caleb Brown and Luke Faulkner who with Dean Hartley make up the senior leadership trio. Brown is now in his third year as Club Captain.

The reserves will be lead by a new group of young men in Scott Webber, and former Mayne Juniors Jaxon Quaife and Scott Forrester. Reserves Coach Nifty Miller is very excited about his young team and looking for big things from them this year.

The first round match this Saturday will be played against Caboolture at the new Burpengary AFL standard facility.