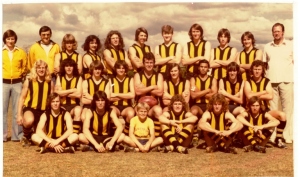 The Queensland AFL community said good bye to a much loved friend yesterday.

Bruce Steenson was farewelled by a crowd estimated by the media at approximately 1,000 people. Irrespective of the number that attended, there are many more people that came in contact with Bruce over his 53 years that will be feeling the loss.

The memorial service was held on the oval of the Aspley Football Club at Graham Road, Carseldine where Bruce’s passionate association with footy first began. The enormous crowd of mourners were treated to a history of Queensland football over the last fourty years both in pictures and in stories.

In a service lead by long time family friend, John Bellert, stirring recollections of Bruce’s involvement in football were delivered by Tony Tucker of the Aspley Football Club, Shane Johnson representing the Mayne Football Club, Gary Fitzpatrick on behalf of the Banyo Football Club and Derek Delaney, the Queensland Masters.

Tributes were also delivered by John Ford on behalf of Bruce’s partner of 31 years, Cathy Andrews, Michelle Davis on behalf of his son Michael Dobie and Kevin Crilly, his long time friend and confidante spoke about mateship. Michael Trost of the Aspley Golf Club gave a personal, at times humorous account of his lifelong memories of the wolf man.

Bruce’s mother Gloria courageously urged the congregation to look after their family and to seek a better environment where it is safe to be on the streets late at night.

A collection of pall bearers were hand picked to represent the various periods of his very full life.

After the service, the hearse carrying “Wolfie” left the Aspley oval to a final siren. Family and friends adjourned to the Aspley clubhouse to share their own stories and experiences of a friend whose life had been ended far too early.