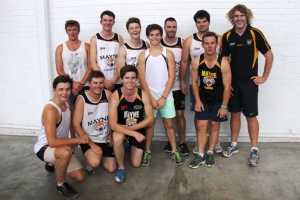 Ciaran is one of the organisers of this event put together to raise funds and much needed awareness of the significant benefits achieved by organ donation and transplant. He asked the Tigers if they would be prepared to participate and Seamus was the one to rally the young guns to put together a team for the event.

The format was five games over the course of the day consisting of five a side teams with unlimited substitutions. The Tigers had a group of eleven willing participants who enjoyed the day and after playing the five round robin games made the finals. The format was very challenging but it was a great cross training work out for the boys playing the unfamiliar round ball game.

One of the teams participating in the day consisted entirely of transplant recipients who were pretty handy and a living example of the great work of Transplant Queensland.

Ciaran sends his thanks to the Tigers for their support of this important charity.