Evans makes it two in a row 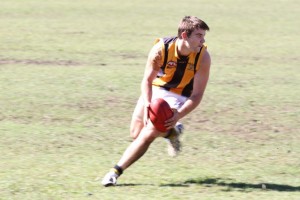 The Club Champion Medal Night was another successful evening for Danny Evans as he took out the Graham Walters Trophy for being adjudged the Best and Fairest Player in the reserve grade for the second year in a row.

Evans played eight games out of a possible sixteen while making six senior appearances during the season making this an extraordinary effort. After returning to the reserve grade he dominated the back end of the season taking out eight of a possible twelve maximum votes on offer in the last four rounds to storm home and take the lead from second placed Luke Radonich who held a handy lead after round 12. Radonich himself received a call up in round 16 to the senior team making it impossible to hold off Evan’s charge.

The Peter Ives Player’s Player trophy was awarded to Scott Webber in a good news story of a player making the transition from rugby league in the middle of 2011. In a rare effort, Webber has worked tirelessly to learn the game to such an extent that he broke through for a senior appearance in the last round of the season. Webber also picked up the most improved award.

In a season of renewal the reserve grade awards were otherwise dominated by a new wave of young players fresh from the under 18 class of 2012 with Eddy Newman taking out the Best First Year Player, while Reece Herrick, Stew Settle, Scott Forrester and Shaun Harvey also collected awards.

The youth now available in the reserve grade squad bodes well for the Mayne Tigers in 2014.