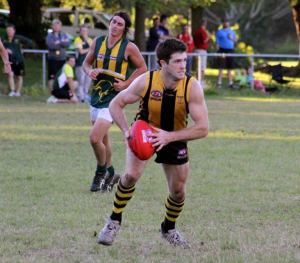 Shaun Daly capped off a remarkable debut season for the Mayne Tigers taking home the coveted Keith Beavis Club Champion Medal at the Tigers’ presentation night on Friday night. With 3 rounds to be counted it was Caleb Brown holding a slender lead before Daly charged home for a popular and much deserved win.

Recruited from the powerful Albury Tigers Football Club, the powerful centreman dominated possession despite heavy attention from taggers each and every week. Armed with the fastest hands in the league Daly recorded an incredible number of handballs and also averaged over 8 tackles per game.

After thanking his partner Steph and his coaches, team mates and supporters, Daly took the chance on stage to reflect on his move north to Brisbane and the Mayne Tigers in 2013:

“Once I accepted the offer to move to Brisbane with work I started to talk with local footy clubs. After my first conversation with Mitch (senior coach) on the phone we just sort of clicked, we had the same ideas on footy and the way it should be played…I am so sure now we made the right move coming to Mayne…the club has been terrific in helping Steph and I settle in with lots of couples at the footy each week too.”

Part of the attraction in moving to the Tigers was the chance to continue to develop his coaching skills with Daly taking over the reins on match day a number of times throughout the year. With club stalwart Mitch Ferguson now stepping aside Daly will take on the role of playing senior coach in 2014.

Daly also was awarded the Mick Nolan Players Player trophy as voted on by each member of the senior side each week.

Caleb Brown finished runner up to the club champion after a magnificent year kicking 40 goals as a centre half forward and 17 year old Henry Leung was named rookie of the year after playing 15 games in the seniors. Other award winners included Sam Paterson, Dean Hartley, Jeames Gillett, Ben McElligott and Corbin Sellen.