Jack Morel playing in the NSW Under 19 mens team 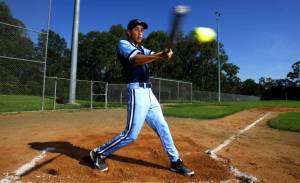 The Ingleburn RSL Softball Club are very proud of Jack Morel who was selected to represent the NSW U19 mens team which played in the national championships in Sydney in January 2019.  QLD defeated NSW in a very close grand final.

With Mum and Dad and sis (Karen and Jean and Paige) there to cheer their 2nd base specialist on, all the years of training and hardwork payed off.  Jack was encouraged by a friend at an early age to give Teeball a go and loved it from the first day.

Jack is an example of what hardwork, training and dedication can do.  So all you Teeballers and Modballers out there, strive hard and we hope to cheer you on at state one day.

If you want to read more about Jack's achievements, check out this article

* IRSL Members and parents please search for our Facebook page (search for Ingleburn RSL Softball Club) and request to join.

* For the latest updates instantly, download and set up TeamApp on your smart phone and search for Ingleburn RSL Softball Club and Softball Campbelltown.

* If you are a current member or parent of a junior member and would like a copy of our club constitution, please email us at irslsoftball@live.com.au

Our mother club and major sponsor

Sponsor of encouragement awards and host of regular fundraising nights