Weston Molonglo Football Club (formerly Weston Creek Soccer Club) was incorporated in the latter part of 1970, with the emergence and growth of the Weston Creek district creating a need for a club separate from the existing clubs in the neighbouring Woden Valley district. Mr Ray Woodbridge of the West Woden Soccer Club and Mr Jock Dickson, fourth resident of Weston Creek, discussed the possibility of starting a soccer club in the area.

On 19 Jan 71 the first club meeting was held to discuss the formation of the Club and 44 parents attended. As a result, the club was originally formed as Weston District Junior Soccer Club (WDJSC), with inaugural Treasurer Andy Hall suggesting the club wear black and white and bear the emblem of the magpie in honour of his beloved Aussie Rules team: Collingwood FC. One of the fundamental concepts of an all age club was stated as being: so that juniors can progress right through to senior status, within the one club, and can readily identify with their ‘Big Brothers’. 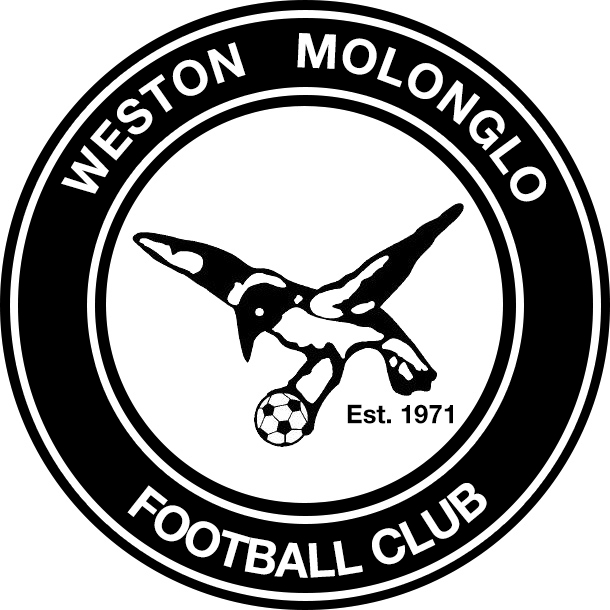 In 1971 the Club entered competition with 9 junior and 2 senior men’s teams. From 94 initial registrations the number had increased to 156 by the end of the first season.

In 1973 the club became an incorporated association and changed its name to Weston Creek Soccer Club. By this stage the club had grown considerably with over 300 players in 19 teams. This season, the senior men’s 1st grade team finished 4th in the league but won the end of season competition, the Viscount Cup, defeating RMC 2-0 in the final. Consequently the Club was invited to enter a team in the ACT Soccer Federation 2nd Division in 1974. This invitation was accepted. The senior team played in the ACTSF 2nd Division and won the pre-season round robin Autumn Shield.

In 1981, 10 years after its birth, the Club formed three separate management committees to manage the Club; a Senior, Junior and Women’s, operating under an overarching Executive. This year saw former junior Steve Hogg tour Europe with the Socceroos, while junior’s Chris Hummel and Andrew Young received scholarships for the AIS program.

In 1986, the Div One Men’s team finished last in the competition (the top league in the ACT) and were relegated, however the following year the Div 2 side (one of 4 senior men’s sides) won the premiership and bouncde straight back up to Div 1 in 1988. Members of this team who became stalwarts of the Club were Pat Mills, Doug Wesney, Tim Dale, Rob Graham, Phil Shakespear and Steve Lazzari. In the latter part of this decade Steve Lazzari began to make his mark on the ACT soccer scene. Steve was the club’s first grade highest goal scorer from 1989 and every season there after until leaving the club in 2001.

In 1991, the Royals Rugby Union Club became the major sponsor of the Club, in this its 20th year, and Weston Creek joined the newly formed ACT Premier League.

In 1995, the Club entered its first two Master’s teams into competition.

As a consequence of winning the Federation Cup, Weston Creek was entered into the 4th round of the NSW Soccer Federation’s knock-out competition, the Waratah Cup. The club drew a home fixture against then national league outfit Marconi Stallions. On a wet and windy Canberra day  (Saturday August 31 to be exact) Weston Creek lined up against the might of Marconi at Greenway oval.

The Weston Creek team, coached by Robbie Graham, that faced Marconi on that day was: Bruce Norton, Leigh Curtis, Tim Dale, Josh Whitington, Alex Stefopoulos, Martin Lazzari, Matt Stocks, Steve Lazzari, Rob Stoddart, Rob Paragalli and Sam Pahl, with Jim Ceraolo, Tony Halton, Blake Jarvis, Damon Howlett and Alan White on the bench. Unfortunately there was to be no Hollywood ending to this match, with the professional outfit running out 9-1 winners (Steve Lazzari getting the lone goal) to end Weston’s run in the cup.

In 1999 Weston were league runners-up in the Premier League (the club's highest ever finish), as well as runners-up in reserve grade.

In 2000, the club won the ‘Youth Cup’, the pre-season premier league under 19 competition. The success of this pre-season cup was short lived however. Jimmy Bland’s resignation from PL coach at the end of 1999 saw all but one of the previous season’s PL runners-up squad leave the club. The exception: 22 year old Justin Webb who immediately took up the first grade captaincy, and was joined in PL by a mix of players from the previous  season’s successful reserve grade team and the talented under 19 team. Unfortunately this young team with an average age of just 20, was unable to win a single game. The team did however see four brothers all play in the same Premier League team, leading club president Warren Barsley to remark to a Canberra Times reporter that the club should be renamed ‘Webbston Creek’, as captain Justin was joined by brothers Daniel, Tim and Chris in the first grade squad.

In 2002, the Executive was able to put together the club’s first Business Plan, which was done by a team of Sports Administration students from the University of Canberra. The club’s finances were boosted when Royals increased their sponsorship threefold from $10,000 per year to $30,000.

At the end of 2002 Warren Barsley retired from the Presidency of the Club and all executive positions - after 19 years with the club, 11 of those in an executive position, and James Lee also retired from the Senior Men’s Chair. This was also the last year that Weston Creek played in the Premier League, as owing to apathy, the club was unable to fill the positions on the Men’s Management committee, attract coaches or managers, hence decided not to renominate for Premier League and Weston Creek SC dropped out of that league after more than 10 consecutive years at the top level in men’s football in the ACT.

In 2003, only one team remained to represent Weston Creek at the senior men’s level, the State League 3 side managed by Ed Watson.

In 2005, the senior men’s ranks slowly started to replenish, this coincided with the return to the club of majority of the 1996 Fed Cup winning side, including legendary marksmen Steven Lazarri to play State League 3.

In 2006, A talented bunch of youngsters who had dominated their previous season in the top level of ACT junior football, moved up to senior football. This team entered into the men’s SL2 competition instantantly making them the first grade senior men’s team in the club. They were one of four senior men’s teams Weston fielded that season.

In 2007, Weston Creek entered a team into State League 1, the second highest grade of football in the ACT. This young team made up mostly of 18 and 19 year olds, aided by some returning Weston Creek Premier League players of old, in Tim Webb and Steve Masters, had a fantastic season, reaching the semi-finals. The ‘old boys’ of SL3 made it to the grand final where they smashed the league champions Monaro 7-2, with Steve Lazzari netting an amazing 5 goal haul.

The following year saw a continuation of the resurgence in the Senior Men’s side of the Club when 7 teams participated in the SL competitions with teams in State League Divisions 1, 2, 3, 4, 6, 8 and 9. SL2 won the league championship and followed that up by winning the grand final, Ben Grieg scoring a towering header in the 1 nil win. SL3 were also league champions, while Div 6 were semi-finalists, all of this leading Weston Molonglo FC to win the major trophy of ACT State League Club Champions for 2008. In the past few seasons the club has continued to field 7 or 8 teams in the senior men’s competitions (the most in the club’s history), with a team consistently in Div 1. From a humble beginning of 94 initial registrations to 1334 registrations in 2017 it shows that there must be something magic in:

Get with the might,
pull on the “Black and White”
and fly high
with the Magpie