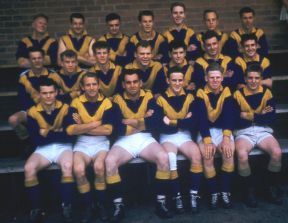 Mr Laurie Barnett, who was on the Dandenong Council for our area and was a market gardener in Dingley. Laurie got the council to purchase the land for a sports complex and a community hall for the people in the Dingley Area. The land was purchased from the Lake brothers. In that week the land was purchased, the Recreation Committee was set up with Joe Souter as President, Ralph Corrigan as Vice President, Alice Harris as Secretary and Tom Souter as the Treasurer.