BACK IN TOWN - Ezra Poyas 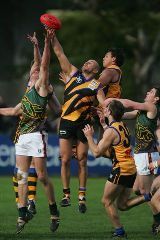 BACK IN TOWN Ezra Poyas has been a surprise late season recruit.

Mark Williams knows better than most just how
hard it is to recruit players, especially quality
ones.

The Sandringham premiership coach has spent the
past eight summers trying to entice the signatures of
would-be recruits. More often than not, especially when he was at
Northern Bullants, just when he thought he had secured
a prized player, news would . lter through that the offer
had been trumped and the player had slipped through
the recruiting net.

Given that backdrop, imagine Williams' surprise when
Zebras' general manager John Mennie rang him on a
May afternoon with the news that the club had just
signed a player. But this was no ordinary player. It was Ezra Poyas,
joint winner with Brett Backwell, of the 2001 Liston
Trophy.

For those with hazy memories, Poyas burst on to the
AFL scene after a decorated career as a junior, which
saw him captain Vic Metro at Under-18 level.
Richmond used its second selection, No. 22 overall,
to draft Poyas in 1999. In his second season, Poyas
dominated in the VFL playing for the Coburg Tigers.
While he showed glimpses of form in the AFL, Poyas
never rose to the levels expected by many, and a fractured
collarbone late in his stay at Punt Road didn't help.
After three years and nine games, Richmond delisted
Poyas, with Melbourne throwing him a lifeline when it
rookie-listed him in 2003.

It was during his time with Melbourne that Poyas
played with Sandringham, which reached the
preliminary final. The Demons released Poyas after the season and
although Sandringham tried to talk him into staying at
Trevor Barker Oval, Poyas decided he needed a break
from football.

Williams said Poyas headed overseas and on his
return lived in Sydney, where for the . rst time in a
while, he was able to get away from football-mad life in Melbourne.
He said Poyas rang the club to ask if he could
play. The Zebras didn't need any think music before
accepting the offer.

When Ezra rang we couldn't believe our luck. He's
a very good player, a very dangerous weapon to have,
especially when you are coming into . nals," Williams
said.

"He's worked his way into form, got his body right and
now he's back in the senior team," he said.
The return of Poyas has been a positive for
Sandringham, which also this season enticed back Paul
Kennedy, whose travels took him to South Australia and
then Ireland, where he played Gaelic Football.

"Sandringham is a very good club - it has a strong
culture, a winning environment, a very good AFL
alignment and the selection process is very fair,"
Williams said.

And Sandringham, which has never won back-toback
premierships in its 76-year history, just became
stronger, with Poyas deciding he wanted to again be
part of the club.