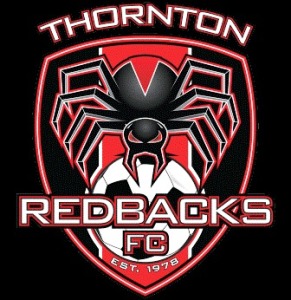 Thornton Park FC was founded in 1978 and began playing in the Christian Churches competition in the 1979 season. In 1981 the club entered the newly formed NNSW 5th Division.
Thornton Park won the 5th Division in 1985 with our current President Mark Whitchurch playing in this side. The side was coached and captained by former Newcastle KB United goalkeeper, Ossie Bellamy.

Thornton rose through the divisions reaching the heights of the Interdistrict 1st Division, where it played for several seasons before being relegated from Inter District First Division at the completion of 1994 season, to the Interdistrict 2nd Division. Current Reserves and Under 23s coach, Neville Bajzath was hired to coach the club and try to win our way back into Interdistrict Division 1.

In 1995 Thornton Park was back on the map winning the Interdistrict 2nd Division Reserve Grade Premiership (Current Treasurer Ray Stafford played in this team) and narrowly losing both First Grade and Reserve Grade Grand Finals. This was the start of a new prosperous era at Thornton.

The then current NNSW 2HD 1st Division was struggling to find sides willing to compete in this competition and after consultation with Committee Members, local community and players, the club entered the 1996 NNSW 2HD 1st Division. Also following us in this new venture was our fiercest rivals Beresfield, as well as Dudley and newly formed Manning Districts.

After a slow start to the season the club managed to consolidate to eighth position out of the twelve teams participating. In 1997 Thornton Park was to taste the heights of the 2HD First Division by finishing third on the table and in front of known powerhouse West Wallsend. The side eventually bowed out of the Final series losing to West Wallsend 3-1 at Macquarie Field, Speers Point.

This success laid the platform for us that saw us visit the final series again on five more occasions' from 2000 to 2008 under the leadership of long standing coach Al Primmer.

The club remained in this division for a period of fifteen seasons. In this time the club established itself as one of the teams to beat. In terms of atmosphere, Thornton Park is the envy of many of the clubs, having a very proud and parochial support at home matches. Thornton Park has built up a reputation in the competition as one of the hardest teams to play against at Thornton Oval.

At the completion of 2010 season, despite finishing 9th in the competition, Thornton Park was demoted into the new Zone Premier League. This was due to the amenities at Thornton Oval no longer meeting the new criteria for the NNSW 1st Division.

Our thanks and gratitude's go to our founding committee, whom some of can bee seen, at many of our home matches. Thanks to Ken Whitchurch (Inaugural President), Stan Brankstone (Inaugural Treasurer), Brett Saunders (Inaugural Secretary) to name a few.

On Friday 18th November 2011 Thornton Park FC was reinstated in the NEWFM 1st Division. This was made possible by the tireless work of the incumbent committee, with special thanks to the executive that enabled this return by meeting all of the criteria requirements of NNSW Football that has enabled our return to the NEWFM 1st DIVISION. As in 1996 the club will be lead back in the NEWFM 1st Division by Neville Bajzath (Deceased) who has returned to the Club Coaching position for 2012.

As stated both these Special Resolutions were passed unanimously at the meeting. Also the club logo which appears on this website has replaced the previous logo and now is our new marketing image.

2013 saw the introduction of Zone Football Womens Squads at TRFC containg U18 & 1st Grade.  Both sides had a fantastic season by making the Semi Finals against some tough opposition with the U18 bowing our in the Semis and 1st Grade loosing in the GF.

2014 saw our women promoted into the NNSWF Herald Womens Premier League fielding teams in U18 & 1st Grade.  This was a learning year for the young ladies and proved a good steping stone for the 2015 season.

2015 saw the introduction of U14 & U16 teams to bolster the Herlad WPL and this procved to be an excellent year for our U14 squad who were Premiers by 12pts then went on to win the Grand Final in a penalty shoot out. Our other 3 squads finished in 5th place and all were a credit to the club.

Herlad WPL  - Club of the Year